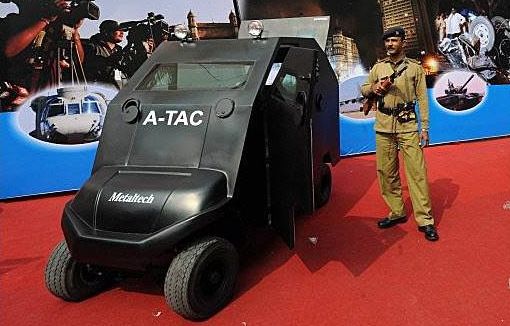 India has proven friendly to small vehicles in the past, but its new golf cart-sized armored car took us by surprise. The battery-powered Anti-Terrorist Assault Cart (ATAC) can carry two fully-armed soldiers or security officers along as is traverses narrow indoor corridors and rides service elevators in the hunt for evil-doers, _ Agence France-Presse_ reports.

The $45,000 vehicle also boasts bullet-proof windows that can survive grenade blasts, according to manufacturer Metaltech Motor Bodies Pvt Ltd. Its design was inspired by the 2008 terror attacks in Mumbai, India where Islamist gunmen held off Indian commandos for 60 hours inside two luxury hotels. The final casualties included 17 security personnel among the 166 people killed in total.

Four firing ports would allow the armed driver and rider to fire at enemies from the safety of their vehicle, and could possibly offer more protection than a bunker shield carried by SWAT or elite police units.

One ATAC prototype on display at the DefExpo 2010 in New Delhi reportedly drew applause from both visitors and Indian military scientists. Metaltech hopes to offer the prototypes on a trial basis to sponsors of the Commonwealth Games scheduled for November in Delhi, as well as to India’s National Security Guards.

Each car can run for about six hours on a single charge and speed along at 15 miles per hour (25 km/hr). That sounds about right for patrolling stadiums or airports; but don’t expect to take one of these out for a run along the highway.