Virginia Professor: We Have a ‘Moral Obligation’ to Spread Life Throughout the Universe

The world is ending. Not right now, mind you, but we can rest assured that it will end. Whether from... 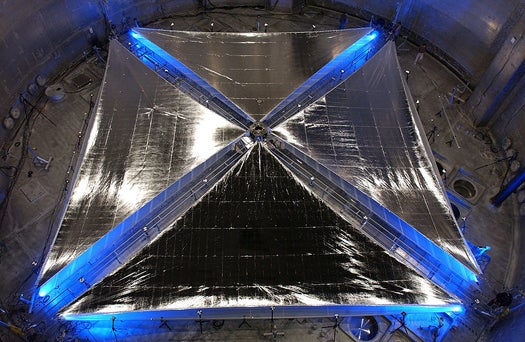 The world is ending. Not right now, mind you, but we can rest assured that it will end. Whether from massive star explosions in nearby solar systems, a collision with another body in space or the death of our own sun, life on this planet — all life — at one point will cease to be. And according to Michael Mautner of Virginia Commonwealth University, we have a moral obligation to seed life throughout the universe before that happens.

Mautner, a research professor of chemistry, argues in an upcoming issue of the Journal of Cosmology that as the product of 4 billion years of evolution from early life forms that very well may have been deposited here from elsewhere in the universe, we have an obligation to keep the evolutionary ball rolling. Self-perpetuation is ingrained in our DNA, and there’s no reason that should be limited to our tiny rock.

It seems like an impossible task; the universe is a hostile place, and even with missions like Kepler designed to identify earth-like planets circling faraway stars we may never find one suited to life as we know it. But it’s important to remember that Earth was once a hostile neighborhood as well; hardy little organisms spent millions upon millions of years sucking down toxic gasses and withstanding harsh environmental conditions before creating a habitat for higher evolution. Kick-starting that process on other planets is our moral duty, Mautner says.

What we need to do, he argues, is send an array of these resilient little life forms with a range of environmental tolerances to a variety of potential target habitats where some species might thrive and eventually create the conditions necessary for higher life forms. These places include extrasolar earth-like rocks, accretion disks around young stars that will eventually form planets and even interstellar clouds that will eventually become the stuff of stars.

These microbial payloads would be small — 100,000 organisms would weigh only 0.1 micrograms — and solar sails powered by the radiation pressure of light would be physically capable of carrying the organisms across great distances in space. The real challenge would be hitting target habitats many light years away. But if we launch a few hundred tons of biomass into space over many years and on multiple missions the numbers should shake out in favor of landing some organic matter somewhere where it can take hold.

But while it’s certain that life on Earth will one day cease, it’s less certain who among us will pick up the tab for multiple space launches sending a bunch of bacteria to sow the seeds of life on planets we very well may never see. Still, we like Mautner’s macro-universal thinking: a cosmic legacy for all life on Earth, perpetuating the evolutionary idea that life can overcome anything (even collapsing stars). Is seeding the universe a moral obligation, a matter of right versus wrong? That’s debatable. But it’s certainly a matter of life or death.