A long time ago in a galaxy far, far away, it wasn’t uncommon to see X-shaped bodies dashing about a... 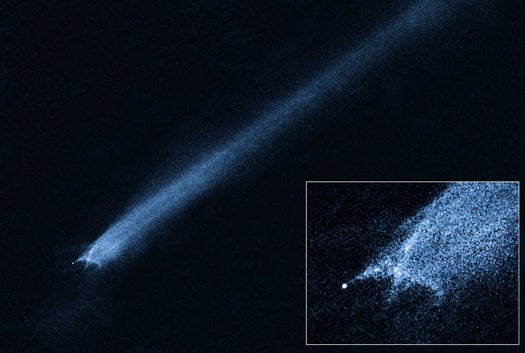 A long time ago in a galaxy far, far away, it wasn’t uncommon to see X-shaped bodies dashing about a solar system. But in this era, in this neck of the universe, it is decidedly strange. Yet the Hubble Space Telescope picked up just such an X-shaped debris pattern trailing a tail of dust and gravel last month that has NASA’s brain trust excited: We may have witnessed two asteroids colliding head-on for the very first time.

The comet-like mystery object, 90 million miles from Earth, was first imaged up by the Lincoln Near-Earth Asteroid Research program in early January, at which point Hubble’s new Wide Field Camera 3 took over and captured the image here. But what looked at first glance like a comet proved in the Hubble images to be trailing a rough debris trail rather than the smooth dust envelope indicative of a comet. Ground-based telescopes also could not establish any of the gases usually present in a comet’s debris trail in the object’s spectra.

Instead, NASA researchers now think the debris trail was caused by the collision of two asteroids rather than the usual ice melting off a comet. With characteristic understatement, NASA described the collision as “energetic.” Perhaps a more appropriate word is “violent,” as the estimated impact speed of a collision of this nature is some 11,000 miles per hour, or five times the velocity of a rifle round.

However you want to describe it, if you look closely at the image above you can see that the nucleus of the debris is oddly outside the debris halo, indicating that some kind of smash-up did occur. Of course, there’s no way NASA can be absolutely sure of this. We have our own theory about what Hubble is tracking out there, and it’s from far, far beyond the Asteroid Belt. 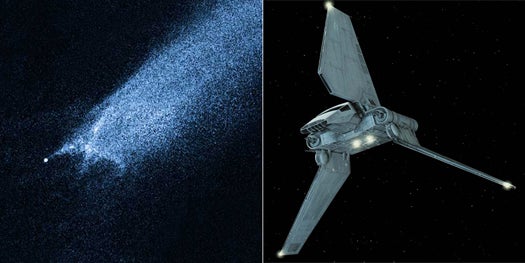 Heading toward the recently discovered forest moon of Endor.