Bayonet Skills to be Omitted from Basic Training for Modern Soldiers 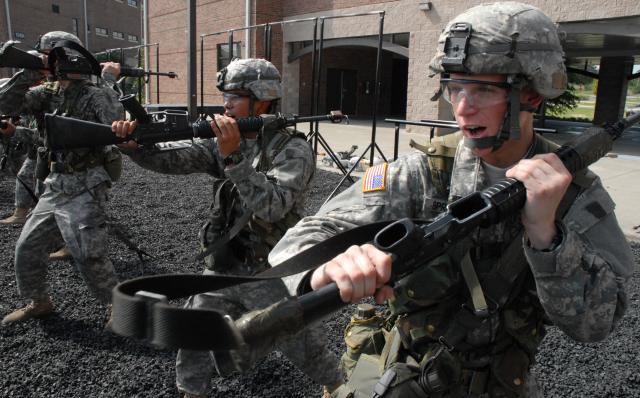 A general in command of U.S. Army training says that a new generation of video-gaming, computer-savvy but less physically fit soldiers will no longer learn how to disembowel an enemy with a bayonet. The passing of the old infantry standby may simply reflect a modern battlefield that has become both more tech-heavy and more tactically complex, according to AP and other news sources.

Modern recruits now come to basic training with excellent computer skills and knowledge, but often lack the “warrior ethos” and even the most basic hand-to-hand fighting skills. Lt. Gen. Mark Hertling, the three-star general charged with overhauling Army training, aims to transform those recruits into hardened warfighters while leveraging their tech skills. As we noted before, video game-style simulators may help recruits feel right at home as they adapt to complex counter-insurgency operations in places such as Afghanistan.

Hertling even predicted the day when soldiers armed with smart phones could use thousands of applications to help repair a truck or perform emergency battlefield medicine, according to AP. Today’s soldiers have already begun testing augmented reality goggles for repairing vehicles, and tracking aerial drone buddies via Google’s Android system for smart phones.

Perhaps it’s no surprise that the general said U.S. soldiers simply had too much to learn already in basic training, as Military.com reports. And besides, many modern rifles cannot even equip the sharp bayonets that have served soldiers for centuries.

But not everyone seems eager to embrace the bayonet-free future, if comments on Military.com gave any indication. One commenter saw “no reason not to train for the worst … because when it comes that time you better be the baddest in the fight or you’re on your way home in a bag.”

DefenseTech also points out the last known bayonet charge carried out in 2004. A group of 20 British soldiers near Basra fought off an ambush by over 100 Mahdi fighters in Iraq, but eventually ran low on ammo. They then resorted to a fierce bayonet charge that killed 20 militiamen and compelled the rest to flee or surrender, with only three British soldiers injured.

The after-action report compiled by the U.S. Urban Warfare Analysis Center concluded that the bayonet charge emphasized the difference between passionate but irregularly trained insurgents and the more disciplined, tactically-savvy professional soldiers. It also added that the incident represented the first time in 22 years that the British army had resorted to bayonets — perhaps as compelling evidence as anything of how warfare has changed.