Meet the next generation of art installations. Together, the SENSEable City and ARES Labs at MIT have created an adaptable,... 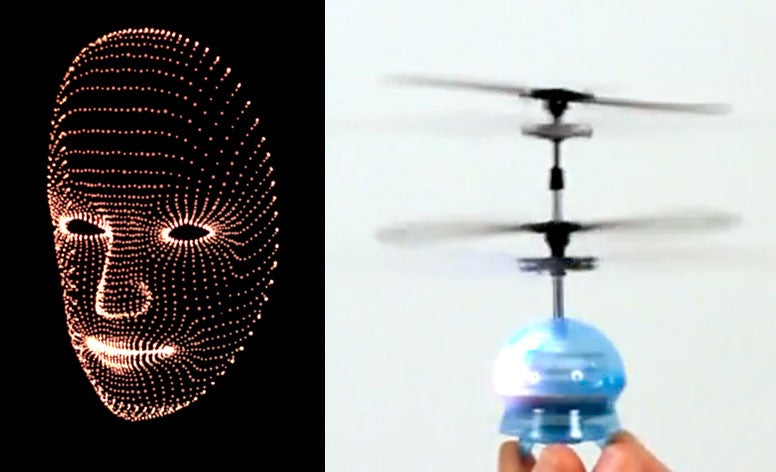 This 3-D face (left) is built of a swarm of golf-ball-sized, LED-equipped helicopters (right).

Meet the next generation of art installations. Together, the SENSEable City and ARES Labs at MIT have created an adaptable, remote-controlled display comprised of dozens of robotic, flying “smart pixels.”

The concept is simple: As with any digital image, the picture is made of groups of tiny dots of varying colors that, at the right scale, appear as one large image. Now imagine the pixels in a pointillist painting like a Georges Seurat aren’t tiny flecks of paint, but thousands of miniature helicopters with varying color LEDs arranged as the image.

Flyfire, though, takes things one further by adding depth. The face of the Mona Lisa, for example, can be blown out and backward to create a 360-degree rendering of the painting.

The helicopters are about the size of a golf ball, each with a color-changing LED. It took the expertise of the ARES flying robotics lab to make small ‘copters that fly steadily enough and that can adapt quickly and with utmost precision.

Right now, Flyfire is best suited for large-scale art installations, since the ‘bots are still a bit hefty. In the future, though, smaller parts will mean smaller ‘copters and more exact displays that don’t need to take up a whole room.