Today marks the 31st anniversary of the Islamic Revolution in Iran. And in anticipation of Green Movement protests today, Iran... 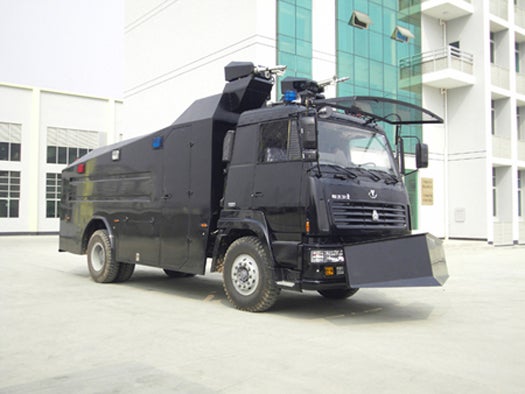 Today marks the 31st anniversary of the Islamic Revolution in Iran. And in anticipation of Green Movement protests today, Iran has a new fleet of scary, high-tech riot-control trucks.

Made in China, the trucks hold 2,640 gallons of water that they can spray at protesters from up to 220 feet away. The truck also contains three 26-gallon drums that can be filled with tear gas, burning chemicals, and paint. The paint marks protesters, so that if they slip pass a police cordon during the chaos of rioting, they can be picked up by the cops later in the day. Each truck costs around $650,000, but it is unknown how many the Iranian government purchased.

What is known is that the trucks, combined with a pre-anniversary Internet crackdown, early shows of force by Basij militia members, and a year long wave of opposition arrests, has succeeded in controlling Green Movement opposition protests.