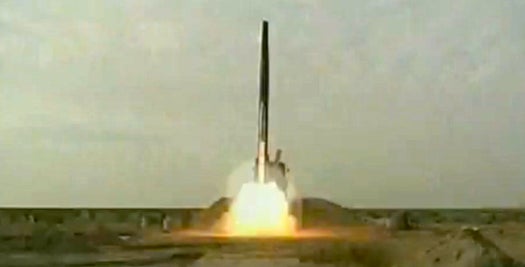 Boldly taking turtles where few turtles have gone before, Iran launched its satellite carrier Kavoshgar-3 rocket skyward earlier today as part of the Islamic Republic’s National Day of Space and Technology. The rocket was sans satellite for the test firing, but crewing the 10-foot launch vehicle were two turtles, a mouse, and a dozen or so worms.

All right, the Soviets sent live tortoises into space a few times in the late ’60s and ’70s, including on a 1968 circumlunar flight that was the first to carry live animals into deep space. So this isn’t the first time a member of the order Testudines has proven it has the Right Stuff. But by launching some of the smaller variety into space it appears Iran has achieved a “first,” one of many the nation aims to notch in coming years.

As part of Space and Technology Day, Iran also unveiled a new homegrown light booster rocket known as Simorgh that purportedly can carry a 220-pound satellite into orbit up 310 miles above the Earth. Three satellites were also revealed: Mesbah-2, Tolou and Navid-e-Elm-o-Sanat, the latter of which could benefit from a NASA-style acronym. But satellite launches aren’t Iran’s only aeronautical ambition; Iran wants to put a man into space before the decade is out, not because it is easy, but because frankly other nations are not leaping at the opportunity to aid Iran in its space ambitions.

Both Italy and Russia have declined to launch Iranian satellites in the past, and Western governments bristled at today’s launch as advanced rocketry isn’t something the United States and her allies like to see in the hands of a diplomatically hostile state — one that may or may not be enriching weapons grade uranium. Iranian authorities did not disclose the nature of the research or the purpose of launching live animals aboard the craft, nor did they disclose the time and place of the launch. The military-green surface-to-air missile truck that paraded the Kavoshgar-3 around to dramatic music prior to lift-off likely didn’t help Iran’s image either.

But necessity is the mother of invention, they say, so we suppose it’s good to see innovation coming out of any corner of Earth, as long as said innovation remains on a peaceful track. Though not usually compared to visionary leaders like JFK, Iranian President Mahmoud Ahmadinejad stated publicly that he aims to send Iranian astronauts beyond earth orbit. Keep reaching for the stars.