Google loves nothing more than redefining vast tech industry sectors with a single stomp of its Godzilla paw. And in... 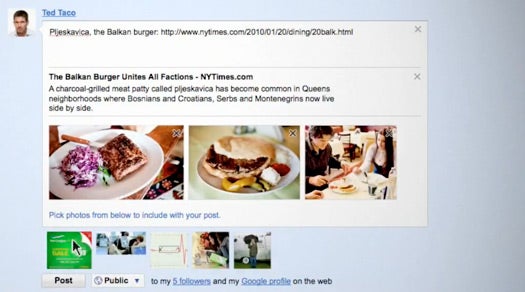 Google loves nothing more than redefining vast tech industry sectors with a single stomp of its Godzilla paw. And in unveiling their latest creation today, a social networking and sharing platform for Gmail and mobile phones called Buzz, the Goog Monster has set its sights squarely on Facebook.

As Buzz rolls out over the next few weeks, Gmail users will see a “Buzz” link below their inbox, which jumps right to the Buzz feed. Unlike joining Twitter or Facebook for the first time, Buzz will automatically find your friends to fill out the feed based on who you chat and email with most frequently. Like Twitter, though, your Buzz feed is public unless you specify otherwise.

In addition to adding people you already talk to, Buzz tries to help you find new feeds to follow. For instance, if two of your Buzz friends are following or commenting on another person’s post or overall feed, it will suggest you hop on the bandwagon, too. Then, based on which of the recommendations you choose to accept, Buzz will learn what types of things you are most interested in to further fine-tune its recs.

When you glance at it, it looks like Facebook. A lot. But, unlike your Facebook news feed, it’s a one-page shop. If your friend posts a Picasa album, for example, thumbnails appear, but if you click on them, it won’t pull you into another page or browser window; instead, a photo-gallery overlay appears over the entire browser window, images are blown up to full-screen size, and a small navigation pane lets you scroll and preview other snaps in the album. The same goes for YouTube embeds, but that’s old hat by now.

You can also link your Twitter, Flickr and other feeds into Buzz. No Facebook, though; in fact, not a single of the four Google developers or exec would even mutter the word through the entire presentation, even when prompted by questions.

The mobile app works to integrate locational information in addition to rich media uploads like photos and video. When you first open up Buzz, it will use the phone’s GPS to find where you are; from there, you can identify a specific location from Google Places like a shop or restaurant. Your Buzz update will then be associated with that Place and vice versa; the Places listing pages now include a sub-section for Buzz updates in addition to user reviews.

Also within the mobile app, you can opt to see a stream of updates that are nearby instead of limiting your stream to your friends’ feeds. Very Twitter-y.

In the end, though, its resemblance to Facebook is fundamental. You and your friends post links, photos, video, random musings, etc. that then get funneled into small mini conversations within a larger feed. When a thread happens to something you post, comment on, or share the Buzz thread jumps into your regular Gmail inbox; from there you can interact with the thread the same way as you would within the feed itself. You can also force a message to appear in a friend’s inbox by “@”ing them, the same way you would with a Facebook update or Twitter post.

Buzz rolled out to the first wave of Gmail users today, and will continue a slow rollout over the next month or so. In the meantime, execs say they’re looking towards the next steps of Buzz integration, including an enterprise product, a way to marry it with Google Wave, and possibly allowing you to phone in Buzz updates with speech-to-text recognition.

Like Wave before it, Google’s aiming to create one-stop shopping, but this time it’s not about sharing spreadsheets and planning presentations. As a social-networking hybrid that takes cues from both Twitter and Facebook, Buzz could end up the one and only place you post, bar none.