If there’s one thing that’s true about all science – and especially science of the cosmos – it’s that the... 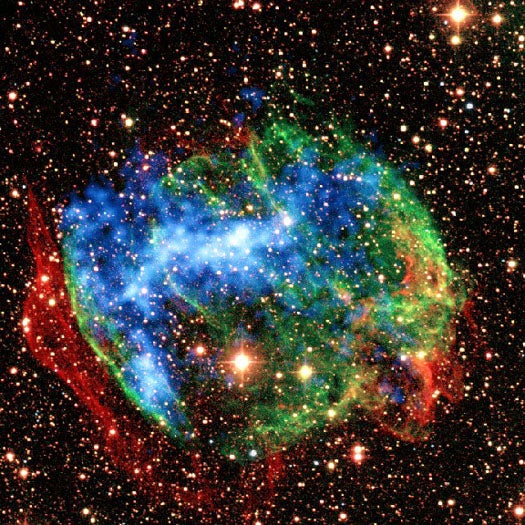 If there’s one thing that’s true about all science – and especially science of the cosmos – it’s that the body of knowledge we consider to be fact is extremely fluid. A prescient reminder of this came late last week via a paper published in the journal Nature, which found that contrary to popular theory, there is indeed more than one way for a white dwarf to die.

But while astronomers absorb this idea and rethink popular assumptions about the nature of Type 1a supernova, there’s another body of assumptions that might need re-thinking as well. After all, we’ve been using the Type 1a supernova – which we thought were uniform explosions – as cosmic measuring sticks for decades, and this recent discovery of a second type of supernova could require us to go back and double-check some of our galactic math.

White dwarf stars were thought to typically enter their death throes by accreting mass from other nearby stars; one massive star begins absorbing mass from a neighboring star until it reaches what is known as the Chandrasekhar limit, a critical mass that triggers a violent nuclear explosion that is visible across the universe. Because the stars collapse upon reaching a common critical mass, the explosions are more or less uniform, and this has allowed researchers to use these explosions as bright, standard candles by which to measure distances across the universe.

But the new data, gathered using the Chandra X-Ray Observatory, shows that while accreting dwarf stars may very well be the source of Type 1a supernova in spiral galaxies like our own filled with relatively young stars, supernova in elliptical galaxies containing older stars more often stem from star collisions. Since these impromptu collisions can occur between stars of varying, inconsistent masses, their supernova, as observed from Earth, could provide misleading data for making spatial measurements of the universe.

Which essentially means a good deal of what we thought we knew about distances between galaxies and other celestial bodies could be wrong.

Potentially. The real takeaway here is not that our previous science wasn’t quite right, but that our measurements going forward will now be better informed now that we know that all Type 1a supernova are not created equal. And as it turns out, most of the dark matter studies that used supernova as distance markers drew upon uniform explosions in spiral galaxies anyhow, so it’s not as though two decades of cosmic measurements will have to go on the rubbish heap. And this certainly isn’t the first time we’ve adjusted our cosmic calculations. But the findings are a solid reminder about how much we still have to learn about the goings-on in the universe; and that it never hurts to double-check.