Who says rockets should just be black and white? 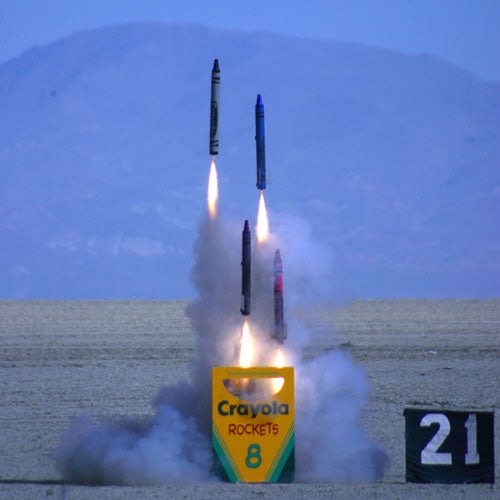 Commercial spaceflight may just be taking off, but private rocket enthusiasts have been launching their home kit variants for decades. One of the more colorful examples comes from John Coker, a self-described “born again rocketeer” who launched this amazing pack of stylized Crayon rockets.

A few years ago, Coker was working with a Loc/Precision I-ROC kit when a friend remarked that the I-ROC resembled a crayon. The idea sparked Coker’s imagination, and he decided to build a pack of Crayon rockets that would launch from a box that reflected the usual yellow-and-green Crayon box design.

The Crayon rockets came together from Loc/Precision components as mid-power, one-pound rockets. Coker’s on-and-off work that began in 1998 culminated in a launch attempt at XPRS 2004 in the Black Rock desert of Nevada.

A final countdown came under clear skies with perfect launch conditions. But when the DaveyFire electric matches popped, only four ignited their rocket motors. That still resulted in quite a show for spectators, even as green, brown, yellow and orange still remained in the box.

Check out the full details and account at Coker’s website here. Or take a look at PopSci’s DIY guide to making your own 5-minute rocket.