Researchers at the Monterey Bay Aquarium Research Institute are done spending valuable time heading out to sea on routine monitoring... 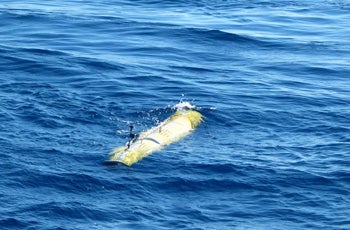 Gulper is a high-tech update to this earlier-generation sister research vessel, which was used for seafloor mapping. Monterey Bay Aquarium Research Institute
SHARE

Researchers at the Monterey Bay Aquarium Research Institute are done spending valuable time heading out to sea on routine monitoring missions, and they have the autonomous underwater robot to prove it. A team of marine researchers there has developed what they are calling the Gulper automatic underwater vehicle (AUV) that operates autonomously far out to sea, planning its own experiments and negotiating ocean depths without human input.

The torpedo-shaped Gulper has changed the way researchers there conduct their jobs, using software similar to that in NASA’s Mars rovers to navigate data-gathering missions and make “decisions” about what data to collect and which routes to travel to best accomplish its goals. Researchers simply program the bot with instructions to understand its general task, and the sub does the rest, assessing changing ocean conditions as it goes and prioritizing its activities so it can return with as much of the data requested as possible.

The team then takes Gulper outside the harbor and sends it on its way; the next day, Gulper returns and the researchers simply download their data, saving countless man hours – not to mention energy and money – that previously went toward sending manned research missions out to sea each month to gather samples and information.

So far Gulper has been preoccupied monitoring potentially harmful algal blooms, but given the fact that it can carry a range of sensors the ‘bot could potentially be used for all kinds of scientific sorties.