For New Multiplayer AR Game, Smart Phones Connect to Each Other Without a Cell Network 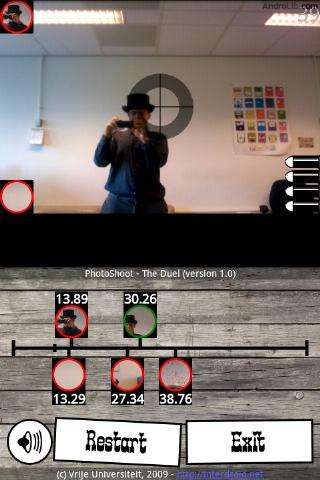 Smart phones have become all the rage among U.S. warfighters who want to stay in contact with each other and drone buddies, but their phones still rely upon having available 3G or Wi-Fi networks. That may change with a new mobile system that create a direct network between two Google Android phones without an additional server, according to Technology Review.

This innovative mobile system is demonstrated in a new multiplayer augmented reality (AR) game designed by Dutch researchers at Vrije Universiteit in Amsterdam. Two Android-armed players have a virtual Wild West showdown by trying to line up onscreen crosshairs in their phone camera viewfinder on the opponent’s face. The first to score a hit to the face in six shots wins.

The ad hoc networking between the phones takes place even before the game begins. One phone generates a bar code on its screen, and the other player uses a second phone to take a picture of the bar code. That action basically scans the other phone’s IP address and pairs them.

To achieve this, researchers modified a computing middleware system called Ibis to run on Android phones, and essentially allow each phone to run its own “lightweight communication server” without the need for a third-party server.

This breakthrough could lead to smart phones that directly communicate with each other — an ideal fit for situations during disasters or military operations where telecom infrastructure is often lacking or destroyed.

Until that day, maybe the Dutch researchers can also adapt this nifty AR game with a helicopter-style robot for some two-player action.