Not content with space alone, the founder of Virgin Galactic wants to explore the oceans too 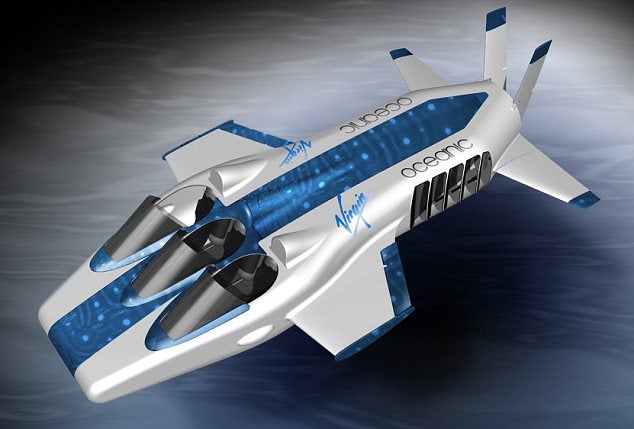 Billionaire Sir Richard Branson enjoys promoting the future of space tourism and encouraging biofuel development, as well as going for long walks along the beach of his private Caribbean island. And if you’re very lucky (or wealthy), he’ll let you take his prototype submersible called the “Necker Nymph” out for a spin, according to the Daily Mail.

The carbon-fiber submarine resembles an underwater airplane with “wind shields” that remove slipstream pressure, and incorporates fighter jet technology and “wings” to move up or down. Branson eventually hopes to explore depths of 35,000 feet, or greater than the height of Mount Everest. But the $669,000 vehicle designed by Hawkes Ocean Technologies can only currently dive to 130 feet.

Guests on Branson’s Necker Island hideaway can supposedly hire out the Nymph for $25,000 a week to check out dolphin pods or catch a glimpse of shipwrecks. That rental price doesn’t include a mandatory $88,000 deposit for seven luxurious nights aboard the catamaran called the “Necker Belle.”

Would-be buyers may still want to hold out for Branson’s wilder ride into space, courtesy of Virgin Galactic. But we suppose that if you could even contemplate shelling out for the luxury submarine experience, a space tourist ticket is also probably within budget.