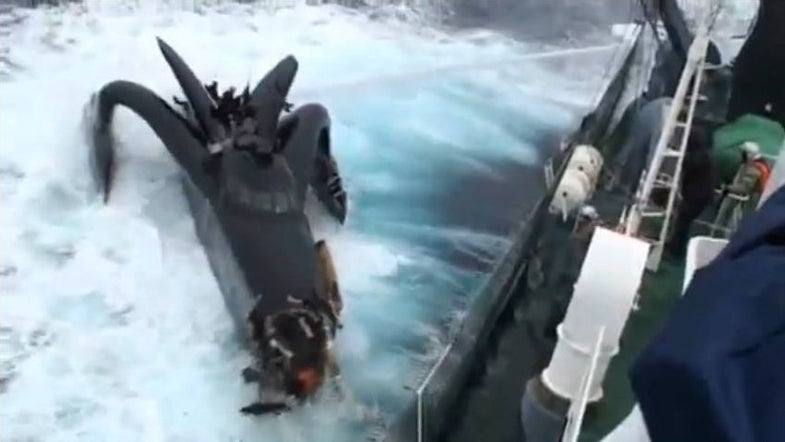 A record-setting stealth boat ended up with a smashed bow during a violent encounter with a Japanese whaling vessel. The stunning collision was captured on film from the Japanese ship, as environmentalists attempted to harass the whaling fleet in Antarctica. A second video taken by the ship Bob Barker shows a different view of the crash.

The “Ady Gil” broke the world record for the fastest powerboat to circle the globe in 2008, and boasts radar-deflecting paint that can disguise its approach. It could also supposedly travel at 46 mph and dive under the waves completely at times. But those capabilities don’t seem to have helped the speedboat in its encounter with a much larger ship.

All that sweet marine technology became part of a controversial anti-whaling campaign by the Sea Shepherds, an environmental group founded by a former Greenpeace member. Greenpeace has criticized the Sea Shepherds for reckless, confrontational tactics that endanger the lives of both fishermen and whalers, according to the UK Metro.

The Japanese whalers accuse the activists of attempting to tangle their propeller with a rope, the BBC reports. Campaigners for the Sea Shepherds also say that they threw chemicals onto the whaling boat.

Following the smashup, The Guardian reports that the crew of the “Ady Gil” has been transferred to another Sea Shepherds vessel, and that the speedboat continues to take on water as the captain tries to salvage some supplies.

Whaling dispute aside, it’d be a shame to see such a splendid craft slip beneath the waves forever.