Russia has finally taken the wraps off its next-gen stealth fighter, which will not only compete head-to-head with the U.S.... 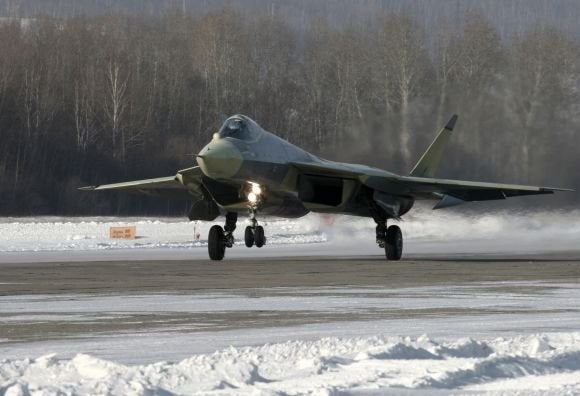 Russia has finally taken the wraps off its next-gen stealth fighter, which will not only compete head-to-head with the U.S. F-22 Raptor, but may also represent a more affordable purchase for other nations on the world market. The BBC reports that the T-50 PAK-FA jet was developed by the Sukhoi company in collaboration with India, and marks the latest modernization attempt by Russia to update its Soviet-era hardware.

Sukhoi claims that the new jet has all-weather capability and can sustain supersonic flight due to repeated in-flight refueling. It also supposedly carries the latest avionics and attack systems, along with the stealth capability that has prove a signature component of Lockheed’s F-22 air superiority fighter. But at least one analyst said that the jet seen in new video footage only represents a prototype that lacks new engines or radar — take a look in this Russia Today video.

Still, Sukhoi plans to make its stealth fighter available for national militaries to purchase starting around 2015-2017. The company also touted the T-50’s $100 million price tag as making it more affordable than the nearly $200 million F-22.

Seems like the manned fighter competition has heated up once again, even if the F-22 Raptor has spent more time looking good for Hollywood and creating fantastic aerial shots than in actual combat. But perhaps the U.S. Air Force’s next counter could come in the form of an pilotless drone, given that the Air Force has been frantically reinventing itself for the unmanned revolution.