A race against time to complete a new subway line 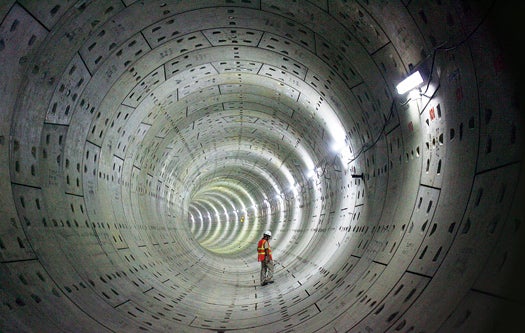 12 Oct 2009, NEW DELHI, India — epa01895242 An Indian Delhi Metro worker is pictured working at a tunnel at the under-construction site of the Delhi Metro Rail Corporation (DMRC) phase II project between Jangpura and Lajpat Nagar in New Delhi, India on 12 October 2009. The Delhi Metro today erected the last pre-cast segments (rings) of the underground stretch of phase II using the last Tunnel Boring Machine (TBM) covering a distance of about 500 meters. About 28% of the DMRC phase II is underground. DMRC used 14 Tunnel Boring Machines (TBMs) for the construction of phase II , the highest number in any south Asian city at one time. EPA/ANINDITO MUKHERJEE — Image by © ANINDITO MUKHERJEE/epa/Corbis

A worker stands inside one of the Metro tunnels under construction in New Delhi, India, in preparation for the Commonwealth Games this October. To overcome the challenges of a tight three-and-a-half-year schedule and construction underneath a densely populated city, engineers used 14 tunnel-boring machines (TBMs) to dig the underground thoroughfare.

One of these machines completed the final subterranean stretch last fall, covering roughly 1,640 feet between two stations on the Central Secretariat-Badarpur line. The TBMs averaged nearly 27 feet a day as they cut through the Delhi silt; while they tunneled, the machines simultaneously installed four-foot-long precast rings that were bolted together to prevent the walls from collapsing.

Before the tunnel can be used, workers will fill and flatten the bottom of the tunnel to lay tracks later on and install electrical connections and ventilation shafts that will extend to the surface.