New Camera System Takes the Guesswork out of Baseball Stats 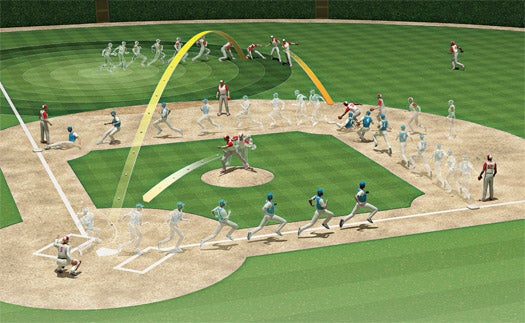 This could be the year that baseball-stat freaks finally crack the “Derek Jeter enigma.” A panel of coaches has awarded the New York Yankees’ shortstop four of the past six Gold Glove awards for fielding excellence. That drives statisticians nuts, because nearly every statistical model ranks Jeter’s defense below average.

But evaluating fielding is baseball’s hardest math. There are just too many unknowns in a play. How much ground did Jeter cover? How fast was the ball moving? In essence: How unlikely was it that he’d catch the ball?

This off-season, the broadcast-tech company Sportvision will install a new player-tracking camera system into ballparks that could finally help produce accurate defensive statistics.

Sportvision’s FieldFX camera system records the action while object-recognition software identifies each fielder and runner, as well as the ball. After a play, the system spits out data for every movement: the trajectory of the ball, how far the fielder ran, and so on. “After an amazing catch by an outfielder, we can compare his speed and route to the ball with our database and show the TV audience that this player performed so well that 80 percent of the league couldn’t have made that catch,” says Ryan Zander, Sportvision’s manager of baseball products. That information, he says, will allow a much more quantitative measure of exactly what is an error.

The tech could transform how teams scout players and dole out contracts, and it will provide more in-depth analysis during broadcasts this summer. But it’s the stat junkies who are really salivating for the data. “We can pick out systematically who’s good and bad, but there’s still guesswork with our models,” says Wharton School statistician Shane Jensen, who writes models for fielding stats. “We’ll certainly be able to settle who’s the best shortstop.”