Nothing lasts forever — especially when it’s government-funded — and so, with just a few more missions, NASA will wrap... 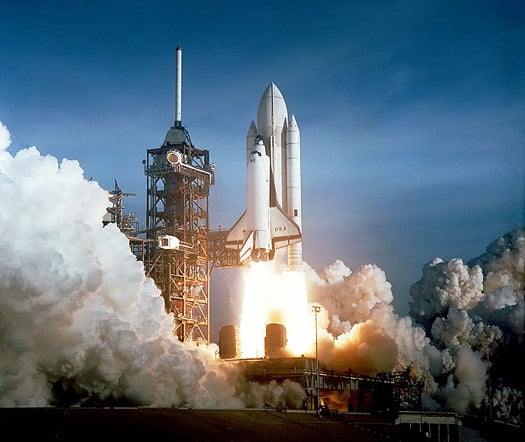 April 12, 1981, the Space Shuttle Program lifts off. It will wind down this year. NASA
SHARE

Nothing lasts forever — especially when it’s government-funded — and so, with just a few more missions, NASA will wrap up the Space Shuttle program in the year ahead, putting the period on a long chapter in America’s history in space. But as its flagship shuttle program goes out to pasture for good, NASA will put an important three-piece climate research legacy into orbit that will help scientists going forward keep tabs on both global warming and solar weather events that affect life here on Earth.

The first of the satellites to launch — the Solar Dynamics Laboratory — will provide solar weather updates to its overseers at Goddard Space Flight Center for at least five years, helping researchers to define correlations between the sun’s weather and our own. Launching February 3, the $844 million hardware will help scientists predict dangerous events like solar flares, sunspots and magnetic storms that, aside from causing electrical interference on Earth, can put manned space missions in jeopardy.

The two earth-focused satellites, Aquarius and Glory, will beam important atmospheric and oceanic data to researchers on the ground, hopefully informing the climate debate and adding to the cannon of climate data available to policy makers. Aquarius’ launch date has yet to be set, but the craft — a joint project with Argentina — will spend at least three years monitoring salinity levels in seawater across the globe.

Current earth-bound means of measuring salinity leave researchers with an incomplete and non-cohesive picture of what the oceans really look like at any given moment. Aquarius’ radiometers can detect even small changes in salt levels, allowing scientists to see how fresh water melting from ice caps distributes itself into the greater ocean and see how salt moves through currents.

With the oceans thoroughly covered, Glory will observe the effects of aerosols moving through the atmosphere on Earth’s climate for the next three years in an attempt to determine their role on Earth’s temperature. Scientists know aerosols affect global temperatures by either absorbing or reflecting solar radiation, but the nature of this process is not very well understood. Researchers hope Glory will give them better insight into the effects of aerosols, and at $419 million for the rig, it better.

The total cost of the 2010 satellite launches using single-use rockets tops $1.5 billion (Aquarius is costing NASA $273 million, with Argentina kicking in its share as well), so there’s little room to argue that 2010 is a lame-duck year for NASA. But the success of the missions is two-fold; the benefit of more informed atmospheric, oceanographic and solar weather data will surely have an effect on the climate change debate, but it will also prove the relevance of maintaining an active and ambitious space program at a time when its future is uncertain.

The headline and opening text of this piece originally suggested, in error, that the shuttle program would launch the SDO, Aquarius, and Glory into orbit. Those satellites will be carried into space by unmanned Atlas V, Delta II 7320 and Taurus rockets, respectively. The story above has been amended to reflect this. More info on NASA’s launch schedule can be found here.