Robotic Arm on Space Station Will Try Refueling a Satellite

NASA’s bold repair mission for the Hubble Space Telescope has inspired engineers to tackle another challenge — using the robotic... 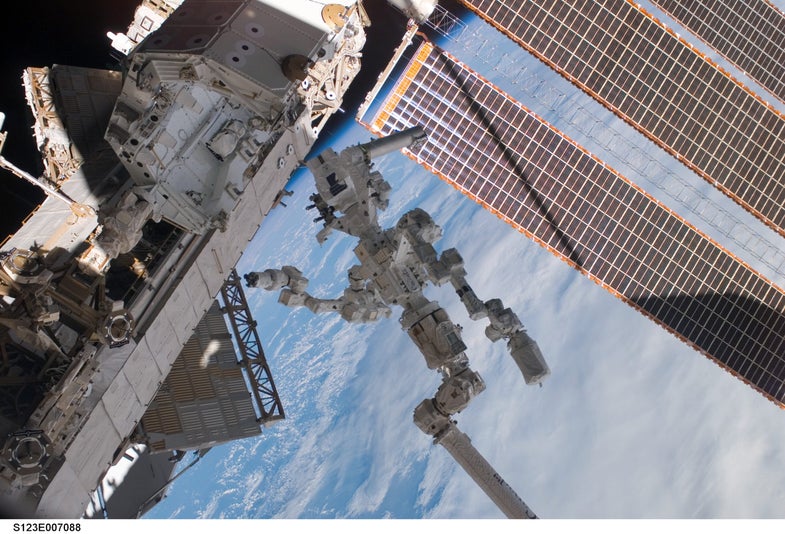 NASA’s bold repair mission for the Hubble Space Telescope has inspired engineers to tackle another challenge — using the robotic arm on the International Space Station to refuel a satellite. [Aviation Week reports that the Canadian “Dextre” arm could use a special tool to cut into a spacecraft that was never designed to be refueled, pierce the insulation, and access the fuel plumbing.

The proposal grew out of a $20 million study that seeks to examine lessons from the five past Hubble-servicing missions, as well as earlier plans for a possible robotic mission to service Hubble. Such an effort might not only pave the way for orbital gas stations, but also test the robotic installation of new instruments or even orbital spacecraft assembly.

“We’ve already developed a prototype tool that’s pretty cool that can cut through the external skin or insulation on the satellite, snip the safety wire on the cap on the fuel valve, attach the hose and turn the valve and transfer the fuel into the vehicle,” said Preston Burch, the Hubble program manager, during a Jan. 11 announcement.

Funding for the study does not cover an actual flight test to the space station that would allow the testing to take place. But NASA may very well spring for the mission, even if it remains unsure of extending the space station’s life beyond 2016. A final report on the study is slated for presentation before Congress in September.

Successful robotic refueling could go a long way toward extending the life of current satellites or spacecraft missions. But we’re really looking forward to the in-flight refueling for colony ships on the way to Mars or other star systems.