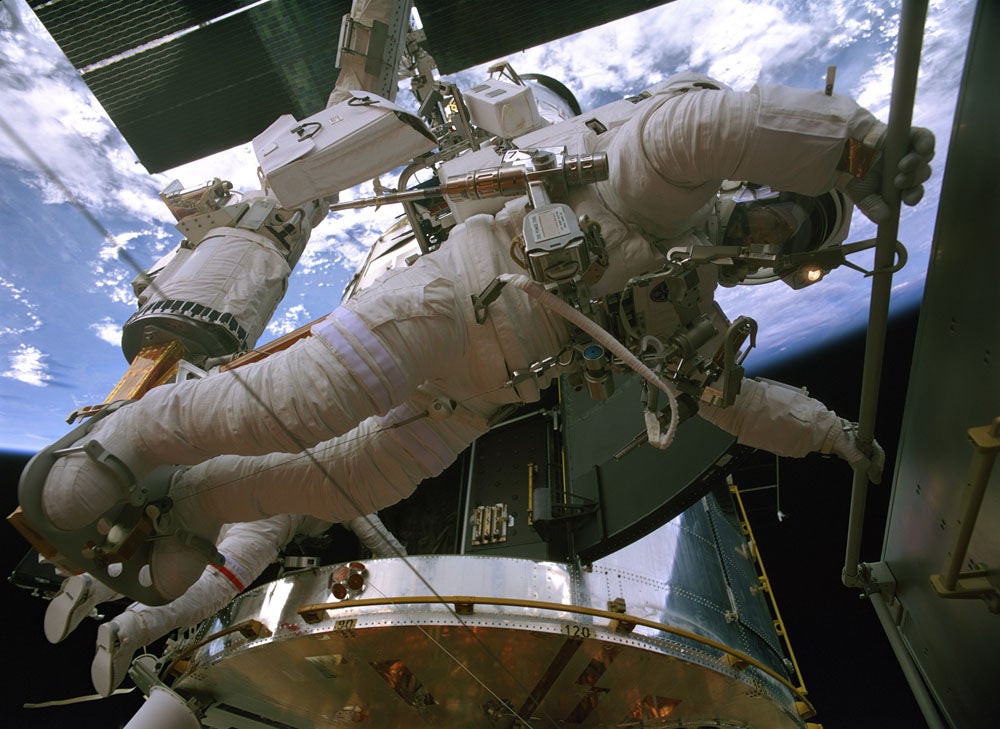 Not your average spacewalk

“It’s OK for astronauts to cry, right?” asked Mike Massimino, one of seven NASA astronauts who flew the space shuttle Atlantis on a daring mission to rescue the Hubble Space Telescope in 2009. The New York City native made his jest during a special preview screening of early footage from the upcoming Hubble 3-D IMAX film on Thursday, and all the reporters laughed. No one doubted his sincerity in describing his surge of emotion upon watching himself and his fellow spacewalkers floating on the big screen.

The preview clips were from raw footage that had not been color-corrected, but still gave a taste of what to expect when the IMAX film officially opens on March 19. Moviegoers watching in 3-D will have the chance of accompanying astronauts during almost every step of the Hubble repair mission, including a thunderous shuttle launch sequence that Massimino describes as riding an enormously powerful beast. For most of us who may never get the chance to hop aboard a private spacecraft for a seemingly weightless thrill-ride, the film may represent the best opportunity to experience what astronauts have long struggled to describe.

Perhaps the crowning moments of Hubble 3-D IMAX will come from the eight minutes of film captured by a 700-pound IMAX 3-D camera that flew aboard the space shuttle. We talked previously with IMAX director Toni Myers about the challenges of condensing five marathon spacewalks down to the pivotal highlights, and many of the preview clips reflected her hard work. The space-hardened camera tucked away inside the shuttle cargo bay presents a wide-angle view of 3-D astronauts looming overhead on the shuttle’s robotic arm and crawling around inside the cylindrical Hubble, all set against the blue-and-white vista of a slowly rotating Earth.

Moviegoers should also stay alert for views taken from the helmet cameras of the spacewalkers. But there’s no confirmation of whether that footage includes a tense spacewalking moment where Massimino had to rip out a stubborn handrail by force. “I hope so,” Massimino said.

Hubble 3-D IMAX ultimately links the human experience of spaceflight with that larger sense of searching for humanity’s place in the infinite void of space. The very end of the film will showcase never-before-seen 3-D tours of the cosmos that come courtesy of the repaired Hubble — a fly-through of the Orion Nebula, and a truly epic voyage from our Milky Way galaxy all the way out to the edge of the observable universe.

Massimino spent time after the preview talking about his enjoyment of seeing the Hubble 3-D IMAX trailer when he took his kids to see James Cameron’s sci-fi blockbuster Avatar. He also listed some home repair misadventures as part of his pre-mission training, and recounted his wife telling him to “Think of Hubble!” during each mishap.

The astronaut did not shy away from more somber subjects, even as he joked about crying again when asked about the Obama administration ending NASA’s plans to return to the moon.

“I’ve always seen great support [for NASA] from the President, Congress and the public,” Massamino said. He voiced confidence that the U.S. will continue to move forward on spaceflight — a sentiment that many more people may hope for after seeing the Hubble rescue in all its IMAX glory.