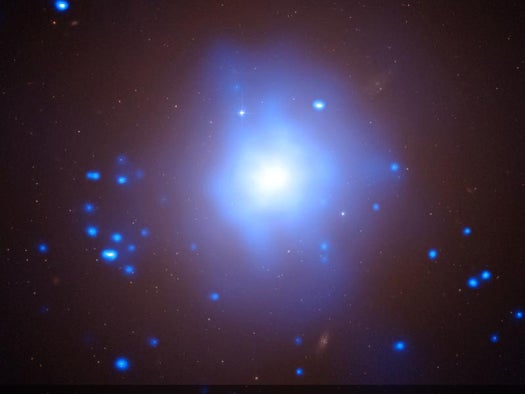 We know that super-massive black holes can devour stars, and we know that stellar-mass black holes born of collapsing stars often anchor at the center of galaxies, but the elusive middleweight black hole is more theory than knowledge. While scientists have long thought they are hiding out there, hard evidence of their existence has been hard to come by. But NASA’s Chandra X-ray Observatory, in conjunction with data from the Magellan telescopes, has captured what looks like the guts of a white dwarf star after being ripped apart by an intermediate-mass black hole.

Peering into the globular cluster at the center of elliptical galaxy NGC 1399 — 65 million light years from Earth — a burst of bright light can be seen above and left of center. Chandra’s image (the shot above is composite, with X-ray light in blue laid over a background snapped by Hubble) shows that the bright emission of light is an ultraluminous X-ray source (ULX). ULXs are a rare class of objects that emit more X-rays than stars but less than the supermassive black holes at the center of quasars. Exactly what makes up a ULX source remains a mystery, but it’s been suggested they are mid-sized black holes with masses somewhere between hundreds and thousands of times that of our sun.

Data from the Magellan I and II telescopes add an interesting layer to this ULXs story however. The spectrum of light emitted indicates the presence of oxygen and nitrogen, but no hydrogen, suggesting that a white dwarf star wandered a bit too close to a black hole whose mass falls in the intermediate range. The tidal forces of this mid-sized black hole then literally ripped the star apart.

If confirmed, the discovery is something of a double-whammy; not only could this confirm the existence of middleweight black holes lingering in globular clusters — a place they have been suspected of existing before — but it also represents the first time such a black hole has been captured in action shredding a star. As a corollary, it also answers the age-old question “who would win in a fight between a white dwarf and an intermediate-mass black hole?”