Beware, enemies of India: Star Wars are back in fashion. With perennial (and nuclear armed) foe Pakistan always teetering on... 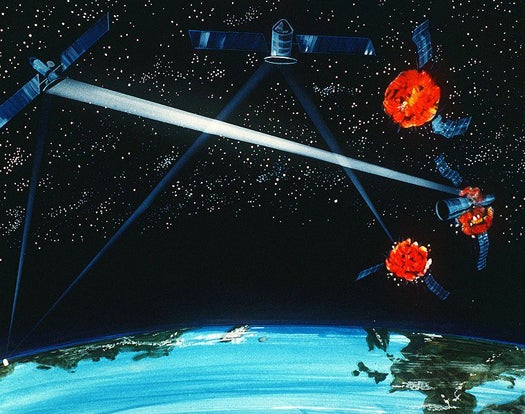 Beware, enemies of India: Star Wars are back in fashion. With perennial (and nuclear armed) foe Pakistan always teetering on the brink of political collapse and neighboring regional superpower China taking greater strides into space technology, India has announced that it is developing an exo-atmospheric “kill vehicle” that will knock enemy satellites out of orbit.

The program was proudly announced as part of India’s ballistic missile defense program, a division of India’s Ministry of Defense. However, in a briefing last week defense officials admitted lots of work on the project is yet to be done. Like, almost all of it. The kill vehicle (read: missile of some kind) will be guided by a laser, which will lock onto the offending satellite and keep the kill vehicle on a solid interception course. Neither the laser nor the kill vehicle actually exists yet, but be forewarned: India will put a dent in your space capabilities at a time and place as yet undetermined.

Of course, India isn’t the first state to dabble in space-based defenses or satellite-slaying technologies. Ronald Reagan’s Strategic Defense Initiative — the now infamous “Star Wars” — proposed to arm a series of ground- and space-based stations with interceptor missiles (for defensive purposes only, of course). In 2007 China brazenly launched a ground-based missile into the atmosphere to demonstrate its ability to destroy satellites, creating a mess of orbital debris when it blew apart an aging weather satellite. The U.S. also used a ship-based missile to incinerate one of its own spy satellites in 2008, as its decaying orbit was threatening to send it crashing down to Earth with toxic materials on board.

So exactly whose satellites might India be protecting herself from? Pakistan, India’s most reliable nemesis, isn’t exactly running a robust space program. More likely the world’s largest democracy is a bit wary of the world’s largest military-minded single-party ruled “republic” right across the Himalayan range. Whatever the reasoning, putting weapons in space has never been a popular topic in the international community; we likely haven’t heard the last word on this.