While Google’s obviously best known for its search, it’s the company’s advertising model that pays for in-house massage, a critically... 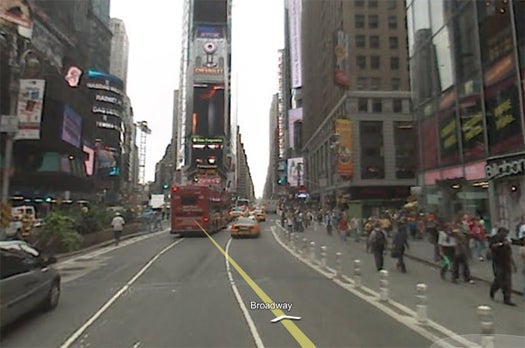 While Google’s obviously best known for its search, it’s the company’s advertising model that pays for in-house massage, a critically acclaimed cafeteria, and sky-high stock price. Now, a new patent indicates that Google wants to combine its 21st-century ad savvy with an old-school publicity mainstay — billboards.

According to ReadWriteWeb, Google may soon start running dynamic advertisements over pictures of billboards in the street view of Google Maps. This technology is enabled by an algorithm that recognizes advertisements as distinct from other elements in the street view photos, and automatically replaces them with new, virtual ads. So rather than Google Maps displaying a months-old picture of Times Square with promotions for out-of-date movies, the movie studio could pay Google to constantly update the virtual billboard with an image of their latest upcoming release.

And naturally, all of the virtual billboards will be linked, so that if a user sees an ad for a product on Google Maps, they can simply click on the image for more information.

Ominously, the patent also includes details about an auction system, leading to the possibility that devious marketers could buy virtual ad space that overlays the image of their competitors’ physical location.

Whether or not this patent will eventually blossom into a full grown product remains to be seen. However, since advertising actually keeps the lights on at the Google offices, I bet the company bean counters want this service far more than some dinky phone that doesn’t even access the iTunes store.