For years, scientists have attempted to construct new bacterial genomes from scratch, in the hope of genetically engineering a microbe... 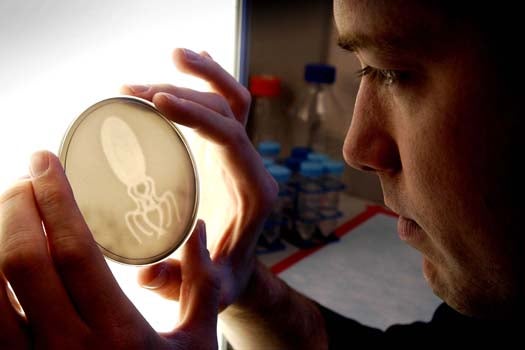 For years, scientists have attempted to construct new bacterial genomes from scratch, in the hope of genetically engineering a microbe that produces biofuels or drugs. Turns out, they’ve been doing it the hard way. A new study finds that editing existing genomes down to only the desired genes works far better than creating new genomes from the ground up.

According to a paper appearing in the Proceedings of the National Academy of Sciences, we don’t currently have enough understanding of how plants or bacteria make useful chemicals to design the entire process from scratch. Simply dropping the gene for a particular chemical from a plant into a bacteria doesn’t work if you don’t also transfer all the genes that regulate the assembly of that compound. This new approach takes a cell that already makes a desired chemical, and strips out all the genes known to produce proteins unrelated to the desired chemical.

In the experiment, researchers removed 1.4 megabases of DNA known to produce secondary metabolic material from the Streptomyces avermitilis genome. Relieved of that burdensome 20 percent of its genome, the resulting Streptomyces colony produced higher levels of antibiotic chemicals.

By stripping the cell down instead of building it up from nothing, all the essential — but poorly understood — cellular mechanics remain in place, but without the ancillary activity that drains energy away from producing the sought after compound in unaltered cells.

Neither the new, top-down approach, or the older, bottom-up approach, is perfect. Ultimately, the key to engineering useful new organisms will be blending the two methods, and working from both the top and the bottom until the bacteria finally does exactly what it’s supposed to.