As if having trouble conceiving a child wasn’t painful enough, the current method of male fertility testing adds to that... 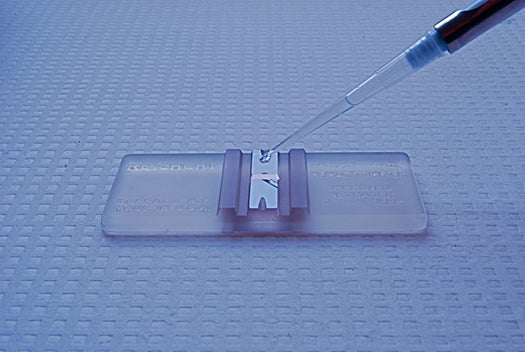 As if having trouble conceiving a child wasn’t painful enough, the current method of male fertility testing adds to that misery with multiple trips to the doctor, awkward moments in sterile rooms, and lengthy waits while lab technicians painstakingly count out individual sperm. A newly developed chip may change that, and provide a fast, at-home method for anyone to test their sperm count.

Developed by scientists at the University of Twente, Holland, the new chip electrically measures the concentration of sperm in a semen sample against a control liquid filled with polystyrene beads, rather than relying on a human to count each sperm one at a time. And instead of giving an exact sperm count, the chip simply tells the user whether they have more or less than the World Health Organization standard of 20 million sperm per milliliter of ejaculate. After three samples taken on different days, the chip will have provided an accurate average sperm count.

The chip is rugged and easy enough for home use, eliminating the need to produce a sample in a sterile, foreign, decidedly unromantic doctor’s office. Additionally, by automating and speeding up the whole process, the chip significantly reduces the cost of the entire process.

Unfortunately, male infertility can result from factors other than a low sperm count, and the chip does not measure other important factors like sperm shape and mobility. But the chip does provide a good, cheap starting point for any man worried about his ability to produce a child.