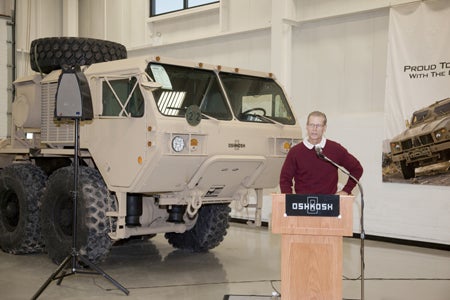 Laser warfare took a big step closer to reality today as Boeing officially selected an Oshkosh Defense military truck to haul around the beam control system for the tactical laser it’s developing for the U.S. Army. Put another way, the idea of driving large, powerful laser weapons around on trucks has gone from the design phase to the fabrication phase. Surely we’ll soon witness the epic laser wars we’ve all been anxiously awaiting.

But not right away. The Oshkosh Heavy Expanded Mobility Tactical Truck (HEMTT), an eight-wheeled, 500-horsepower boxy behemoth, will be shipped to Boeing’s Huntsville, Ala., facility this spring for integration with the beam control system. But a demonstration weapon won’t be fired at real targets until fiscal 2011, and even then a surrogate low-power beam will take the place of the real high-energy weapon.

However, the move from design to fabrication is a big step, taking the Army’s High Energy Laser Technology Demonstrator program out of the drawing room and onto the firing range. Boeing is developing a bevy of tactical laser systems, including the Airborne Laser and the Free Electron Laser, and proving that one system works will go a long way toward developing the others.

The laser that will ride aboard the HEMTT A4 is a solid-state bad boy capable of countering rocket, mortar and artillery projectiles with extreme precision. The control system can acquire, track and select a vulnerable targeting area on a moving target in the amount of time it takes the laser device to send a beam to the targeting system, which aligns it for the kill. In other words, really, really quickly. So don’t let the lumbering HEMTT A4 fool you; when it comes to warfighting capability, there’s nothing else like it.