As part of the cosmetic industry’s attempt to shift away from animal testing for makeup, L’Oreal and the Hurel Corporation … Continued 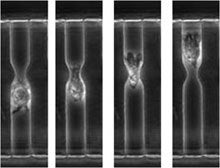 In this series of photos, dendritic skin cells move across a chemical gradient, simulating how they behave in the body after coming in contact with an allergen compound. Hurel Corporation, via Technology Review
SHARE

As part of the cosmetic industry’s attempt to shift away from animal testing for makeup, L’Oreal and the Hurel Corporation have designed a new chip that simulates the behavior of skin cells, eliminating the need to test the allergic response of lab animals to cosmetics.

The chip contains a layer of cultured human dendritic cells, a type of skin cell associated with immune response. When the skin comes in contact with an allergen, the dentritic cells migrate to the lymph nodes to alert the body of the problem and provoke an immune reaction.

For the US or the European Union to approve new makeup for sale, the cosmetic company needs to prove that the compound doesn’t cause any allergic reactions. Currently, they prove this by applying the make up to the skin of a female rat.

A fully functional prototype of the chip won’t be ready until 2011, but a commercial version needs to hit the shelves by 2013, when a European Union ban on animal testing goes into effect.