An Israeli scientist has proposed a way to build a quantum propulsion machine by pushing on the electromagnetic fields within... 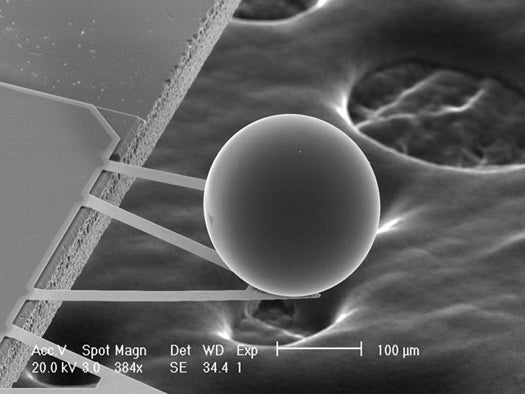 One of the measurable forces inside quantum vacuums that makes the idea of magnetoelectric quantum wheels plausible. Umar Mohideen, University of California at Riverside
SHARE

An Israeli scientist has proposed a way to build a quantum propulsion machine by pushing on the electromagnetic fields within a quantum vacuum, generating a force that, theoretically, could be harnessed. Sounds simple enough, right? But leaving the complex jargon of quantum mechanics aside, the implications are pretty amazing.

The mechanics are essentially this: according to quantum mechanics, vacuums are not simply voids, but contain, fleetingly, electromagnetic waves popping into, and out of, existence. These waves possess measurable force, but the new approach is less concerned with those forces and more concerned with the momentum associated with the electromagnetic fields. If we can manipulate that momentum, shouldn’t we be able to create an opposite reaction force? (For a bit of background on this, see Wikipedia’s useful articles here and here, or enroll in your nearest four-year university.)

That reaction force — propulsion, to the rest of us — is what’s interesting here. Alex Feigel at the Soreq Nuclear Research Center in Yavne, Israel, suggests that by introducing magnetoelectric nanoparticles to interact with the electromagnetic fields inside a quantum vacuum, we should in theory be able to create mechanical energy — a magnetoelectric quantum wheel, as he calls it — harnessing the forces generated inside a quantum vacuum.

What’s so significant about all this? For starters, unlike many other theories in quantum mechanics, this one is relatively easy to test. If that works out, it could open the door to new ways of researching and investigating the quantum world around us. In the future, quantum wheels could have practical applications, like correcting satellite orientation in space.

Moreover, while the wheel is not rewriting the laws of physics — that is, manipulating the particles will consume energy — the propulsion occurs without any loss of mass. We don’t want to jinx anything by bringing up deep space travel here, but the idea of propulsion that potentially wouldn’t require large reservoirs of propellant is exciting, to say the least.