There’s no question that the U.S. military is operating at a very high technological capacity, but the tactical edge that... 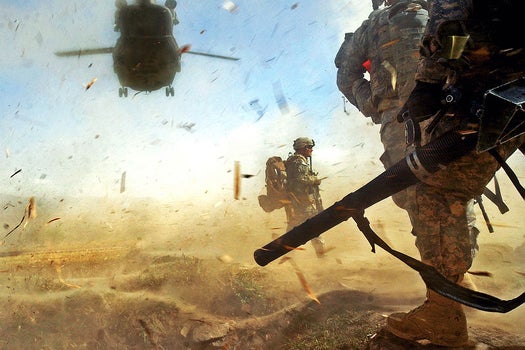 There’s no question that the U.S. military is operating at a very high technological capacity, but the tactical edge that commanders have back at HQ doesn’t always translate to grunts in the field. That gap is closing however, as the Army recently networked two distant infantry units together in a mobile “cloud,” allowing them to trade video imagery, voice commands, text messages and other data between between them as they operated, as well as with far-flung command posts.

The Man-packable Network Integration Kit (M-NIK, in mil-speak) is a router and network mediator packaged with a satellite radio and other data transmitters — including elements of the much-hyped but too-heavy Land Warrior system — giving troops on the ground unparalleled ability to download video feeds from drones and satellites and share intelligence and other data vertically up the command chain, as well as horizontally to fellow soldiers platoons.

But that’s not even the best part. The next level of the system will inject some “network lethality” into the unit cloud, linking artillery, aerial drones and bombers into the system so soldiers in the field can call in fire support or air cover directly, without translating orders, coordinates and the like through a command post. Likewise, patching platoon leaders into the video feeds from Apache helicopters hovering over a battlefield would greatly increase their ability to pinpoint targets at night or in tough terrain. After all, it’s far easier to accurately convey “they’re 50 meters northwest of where you’re targeting” than “they’re over by that big tree.”

The downside: Like the Land Warrior, at 20 pounds the M-NIK is simply too heavy. But with advances in miniaturization and battery technology occurring at breakneck speed these days, the brass thinks a much lighter comms package with cloud connectivity is not too far away. The biggest technological hurdle between 20th-century infantry and the next generation of super-connected soldiers is packing satellite connectivity into a small, lightweight radio.

But in contrast to its Land Warrior efforts, the Army isn’t looking for a catch-all communications solution. It plans to deploy elements of the new system as soon as they are battle-ready, leaving the architecture open so lighter, better tech can be added to the system as the technology catches up to the vision. That means a smarter, cloud-connected force could begin taking shape in the very near term.