Your next flight could be in a convoy 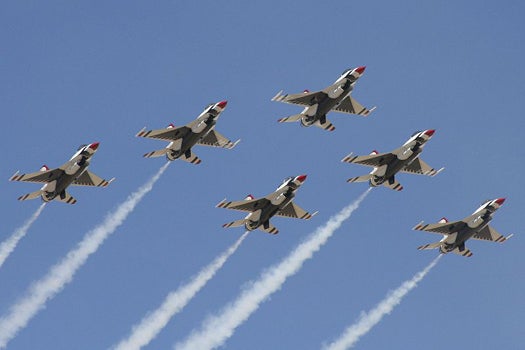 It turns out the lumbering Spruce Goose could’ve learned something from its namesake. Researchers at Stanford suggest that airliners flying in formations akin to the “flying V” employed by migrating geese could trim double digits from fuel consumption and emissions, improving overall range efficiency and saving on fuel costs.

Aeronautics experts at Stanford found in previous research that a formation of 25 birds flying in formation — an echelon, V-shape, etc. — can improve their range efficincy by a whopping 71 percent over solo flight. This is due to an aerodynamic phenomenon known as upwash that causes the air flowing over a bird’s wings to curl upwards as it passes the wingtips. Birds flying in its wake experience reduced drag, expending less energy to fly a given distance.

When the same principle is applied to aircraft, the results are not too different. The Stanford team modeled three planes departing from the West Coast and rendezvousing over Utah in a V formation. If the planes rotate positions so each one spends time in the favorable spots, the team found that the planes could shave 15 percent from both fuel consumption and carbon dioxide emissions, while trimming a quarter from nitrogen oxide output.

Of course, the biggest obstacle to fuel-saving formations in commercial travel is safety regulation. Currently, the FAA requires commercial aircraft in American airspace to stay five miles apart at cruising altitude. It’s also unclear whether commercial air carriers could, or would, coordinate their schedules to take advantage of a formation’s efficiencies. But the Stanford team points out that planes don’t have to fly in Thunderbirds-style close formation to take advantage of upwash. They could actually fly a handful of nautical miles apart, though FAA would likely have to relax standards a bit.

But commercial flight notwithstanding, military convoys could take advantage of upwash-boosting formations, and in fact is already looking into the matter. Taking a page from nature’s book, military cargo convoys may soon take advantage of the flying V to increase range and efficiency, as well as to reduce the environmental costs of national defense.