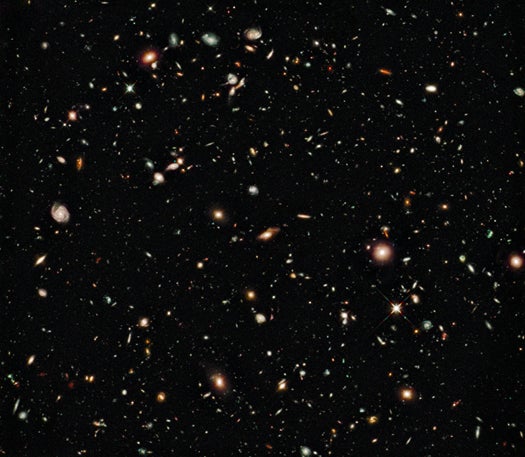 A new study published in ACS Earth and Space Chemistry suggests the presence of atmospheric oxygen on another planet is far from a sure sign.

After nearly two decades and five servicing missions to repair and update its precision observation equipment, the Hubble Space Telescope is still pushing the envelope of astronomical observation, most recently by snapping this image, the deepest image ever taken of the universe. Taken over four days in late August 2009, this newly released composite image allows researchers to see farther back toward the Big Bang than ever before.

Taken with the Hubble’s newly-installed Wide Field Camera 3, Hubble gathered light from near-infrared wavelengths, allowing scientists to see how galaxies developed early in the universe’s history. The research implications are vast; several research teams are currently searching for undiscovered galaxies that were previously undetectable. Some researchers are convinced Hubble is on the verge of discovering “quantum foam“–a model for the foundation of the universe and a big step toward to reconciling relativity and quantum mechanics. Perhaps most importantly, Hubble is laying some important groundwork for NASA and ESA’s next-gen space observatory, the James Webb Space Telescope (JWST), which will enter service in 2014.

Of course, from its orbital vantage point Hubble has provided researchers with a bevy or amazing glimpses into deep space over the last nineteen years. It has consistently looked deeper and deeper in to space as various upgrades have boosted its vision, finding the source of gamma rays bursts from distant stars, and allowing researchers to see extrasolar planets for the very first time.

Though JWST is launching in 2014, don’t make the mistake of thinking Hubble is done making new discoveries; though JWST is superior to Hubble in many technological respects, it will only observe in infrared, leaving the visible and ultraviolet spectra to Hubble’s capable eyes.