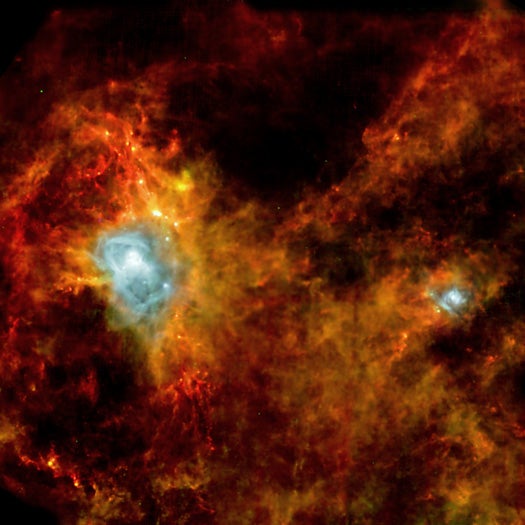 The European Space Agency’s Herschel telescope has reached deep into a previously invisible stellar incubator 1,000 light years away, capturing this image of 700 new stars forming from space dust and gas. Taken with Hershel’s Photodetector Array Camera and Spectrometer (PACS) and its Photometric Imaging Receiver (SPIRE), the image covers an area 65 light years across that is so shrouded in cosmic dust that no previous infrared telescope could see inside.

The newly released image was actually taken on October 24 as part of an ongoing study of Gould’s Belt, a huge ring of stars circling the night sky. The belt provides stars that make up many well-known constellations such as Orion and Scorpius, but this image of the constellation Aquila is considered particularly important to astronomers because it examines a region of space previously invisible where hundreds of stars are being birthed.

Researchers hope that studying the stardust will provide clues as to how stars and galaxies spawn from the life cycle of the cosmos. Herschel’s far-infrared and sub-millimeter wavelength detectors allow it to see so deep into space that it can observe galaxies humming along when the universe was but half its current age, when star birth was enjoying a boom. Herschel also sports the largest mirror (3.5 meters diameter) of any telescope ever sent into orbit, allowing it to gather long-wavelength radiation from some of the deepest and coldest places in the universe and making it the largest telescope ever to image the cosmos.

In the image above one can see 700 prenatal stars that are still just condensing clusters of dust and gas, about 100 of which are protostars on the brink of bursting into nuclear fusion. The two bright areas are regions where the newly forming celestial bodies are causing hydrogen gas to shine.

The image is the first new release of the ESA’s new Online Showcase of Herschel Images — which went live today. It’s a site worth bookmarking if the image above gets the cosmic geek in you excited. New hi-res images of Herschel’s deep space photography projects will post there periodically.