Physicists use their nano-skills for the greater good, by creating a tiny bit of holiday cheer 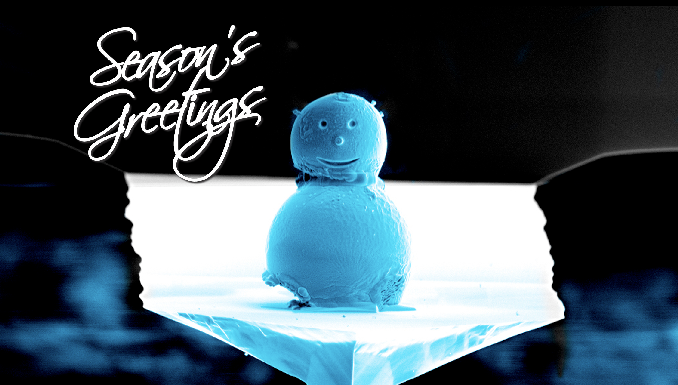 What do tiny smiling snowmen mean for science? Not much; these physicists just decided to show off their ability to make really small things.

This little guy measures just 10 micrometers across, or just 1/5th the width of a human hair. Scientists at the National Physics Laboratory in the UK built the snowman body from two tin beads, and milled the eyes and smile in the top bead using a focused ion beam. The snowman also has a platinum nose deposited by said ion beam, which probably beats a silly carrot any day.

By comparison, the tiniest snowflakes might reach a size of 1 millimeter, or 1,000 micrometers. So building the snowman by conventional backyard means was out.

Instead, a system capable of nano-manipulation helped researchers assemble the snowman “by hand.” Platinum deposition helped weld all the parts together.

Still, the miniature snowman might put a smile on your face despite its apparent lack of scientific value. Just don’t accidentally step on him, or else Jack Frost might pay a visit with his sharp icicle knives.

[National Physical Laboratory via The Register]