Some rivalries die hard. Ham the American chimpanzee stirred up some Cold War ire when he became the first hominid... 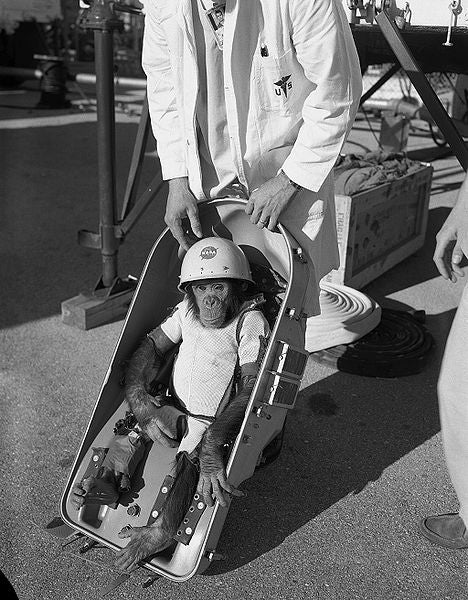 Some rivalries die hard. Ham the American chimpanzee stirred up some Cold War ire when he became the first hominid in space in early 1961; now, scientists at the Institute of Experimental Pathology and Therapy, the pride of early Soviet space science, want to send one of their 350 apes on a mission to Mars — with a robot overseer, naturally.

The institute resides in Sukhumi in the breakaway Georgian province of Abkhazia (remember that brief military tangle last year when Russia rolled through its former Soviet satellite?), where it once churned out medical research, as well as two rhesus monkeys that traveled into space in 1987. When the Soviet Union collapsed so did the institute’s benefactor, but a renewed relationship with Russia since seceding from Georgia has rekindled Abkhaz-Russian relations, as well as the prospect for sending one of the institute’s many surviving apes into space.

Russia’s Cosmonautics Academy is in preliminary talks with the institute regarding a simulated space flight to Mars that would lay the foundation for a future mission. As such, the institute may become home to a biosphere-like containment facility like the recent Mars-500 project that confined six humans in space-simulating conditions for 120 days. A round-trip journey to Mars is estimated to take about 520 days, so a Mars-bound space ape would have to withstand confinement for very lengthy periods of time.

That’s where the story takes a real twist: to help the monkey maintain itself during such a long journey, scientists are considering sending a helper robot along on the mission to feed and clean up after the ape. The monkey, of course, would have to be carefully trained to interact with the robot. Yerosha, one of the rhesus monkeys the institute sent into space in 1987, managed to free a paw and run amok during Russia’s last 13-day space-ape adventure, so there’s no telling what sort of calamities might befall a bored Russian ape on a year-and-a-half mission to the Red Planet. Even if the mission never materializes, there’s probably a Pixar script somewhere in that premise.