It’s a scene familiar from a plethora of TV shows and movies: the crime scene photographer, carefully stalking around a... 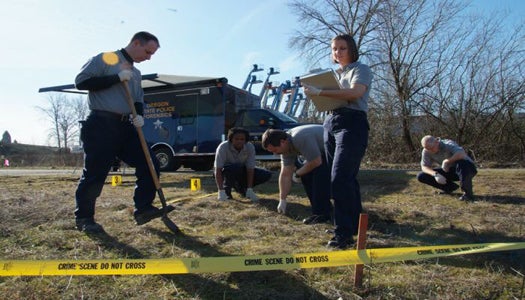 It’s a scene familiar from a plethora of TV shows and movies: the crime scene photographer, carefully stalking around a taped-off area, meticulously documenting each piece of evidence as they lie beneath neon markers, noting the precise placement of each item as he snaps away. Well, thanks to a new procedure developed by Spanish scientists, that crime scene photographer is going to have a lot less work on his hands.

Whereas current crime scene investigators need to carefully measure every aspect of the scene for later recreation in the lab, researchers from the University of Salamanca have devised a geometry procedure that maps out the entire crime scene based on the measurement of a single item.

The control item, along with three vanishing points in the photo, are measured against the geometry of a specially calibrated camera lens. By calculating how the size of the control item relates to the warp of the lens, the researchers can reconstruct the exact measurements of the crime scene in 3-D, all from a single photo.

The process is still in the testing phase, but it might not be long until a policeman can tell a crime scene investigator to “enhance” a photo and actually receive another view of the picture, instead of a condescending stare.