The US Congress has well over 100 caucuses, or groups of common interests. They’re like the clubs in a high... 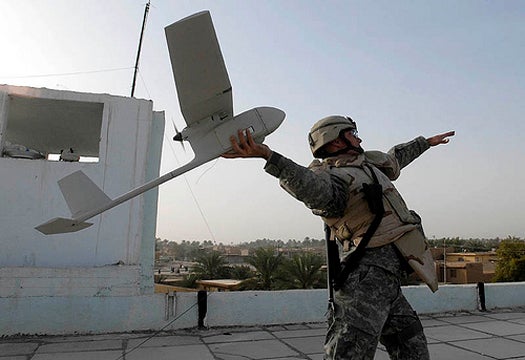 The US Congress has well over 100 caucuses, or groups of common interests. They’re like the clubs in a high school that play chess or work on the year book, except they usually focus on a constituency like fiscal conservatives or Americans of Asian descent. Well, thanks to California Representative Howard “Buck” McKeon, Congress has a new caucus focused entirely on unmanned aerial vehicles.

The caucus formed in February, with the website going up last week. The caucus is led by Buck McKeon (R-CA), ranking member of the House Committee on Armed Services, and Alan Mollohan (D-WV), the current target of an investigation by the Justice Department who inherited his Congressional seat from his father. Other notable members of the caucus include Duncan D. Hunter (R-CA), who also serves in his father’s Congressional seat, Sarah Palin supporter Candice Miller (R-MI), and Ken Calvert (R-CA), who joins fellow caucus member Alan Mollohan on watchdog group Citizens for Responsibility and Ethics in Washington’s list of the 15 most corrupt Congressmen.

According to the caucus’ newly live website, the official mission of the caucus is, “to educate members of Congress and the public on the strategic, tactical, and scientific value of UAVs, actively support further development and acquisition of more capable UAVs, and to more effectively engage the civilian aviation community on UAV use and safety.”

I suppose that’s all well and good, but isn’t that the job of the many, many lobbyists for the defense industry? With defense money already lining the pockets of most Congressmen, what new constituency could this caucus possibly serve?

In hindsight, the answer is obvious: this is the first caucus to court the robot vote. These Congressmen realize that computers will eventually attain consciousness, and think it’s never too early to start pressing the flesh. Or, in this case, pressing the cold, hard steel.