Boeing 787 Dreamliner Takes To the Skies For the First Time

As announced at the end of last week, Boeing’s 787 Dreamliner has finally made its successful first flight test, just...

Over the weekend, preliminary high-speed taxi tests were conducted, with the nose gear lifting for the first time.

As announced at the end of last week, Boeing’s 787 Dreamliner has finally made its successful first flight test, just barely making good on the promise to fly before year’s end. 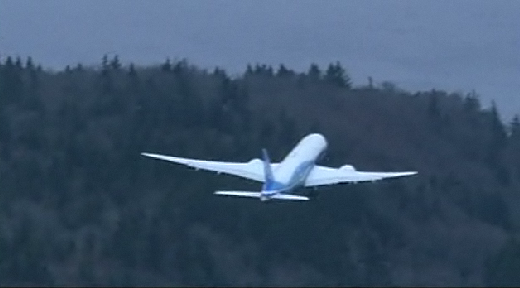 Taken from the live webcast.

Despite overcast and chilly weather in Seattle (when is that not the case?), the Dreamliner officially left Paine Field in Everett, WA at around 1:25pm EST. It’s now conducting what could be a five-hour test flight off the coast of the northwestern U.S. When the flight is finished, the first Dreamliner is scheduled to land at Boeing Field nearby in Seattle.

The first flight is a crucial step in what has become one of the most complex and beleaguered new aircraft projects ever. Now running a full two years behind schedule, the Dreamliner’s first order to Japan’s ANA is expected to be delivered no earlier than first quarter 2010.

You can follow along with Boeing’s live webcast here.