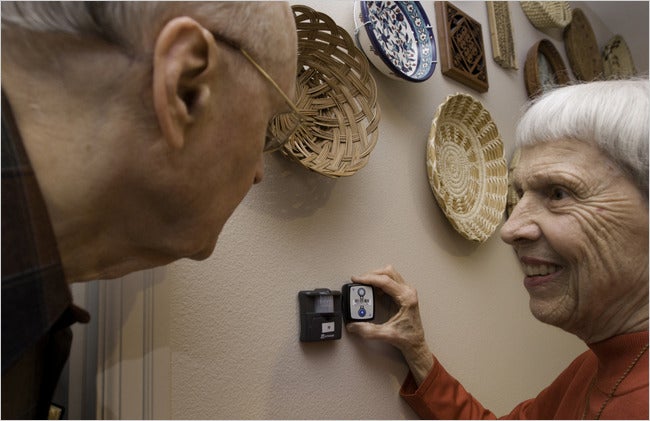 Sensor-studded clothes, carpets, and homes could track the gait of grandma or grandpa and ensure that they’re not in danger of falling. The U.S. National Institute on Aging has sponsored initial research into how such wireless monitoring could better monitor the health of a growing geriatric population. The European Union has also devoted $1.5 billion to studying technologies and services for the aged.

Wearable and embedded sensors can already precisely gauge walking speed, stride, step width and body sway to try and detect warning signs that a person might be at risk of falling. The New York Times reports that falls among the elderly already constitute something of an “epidemic” that affects more than one third of people 65 or older, and costs up to $75 billion annually in the U.S. alone.

An Irish study by Technology Research for Independent Living has already shown early promise for this approach. Researchers collected sensor data to customize exercise programs for muscle groups and change medication to address dizziness in their elderly study participants, and reduced falls by 30 percent compared to a similar age sample.

The approach has expanded with a five-year study that puts wireless sensors in the homes of 230 elderly volunteers, and began in 2006 with funding from the U.S. National Insitute on Aging. The U.S. study emerged as collaboration between the Oregon Center for Aging and Technology, the Oregon Health and Science University and Intel.

Sensors may not have become a dime a dozen just yet, but their growing affordability has clearly enabled projects such as this. Even Nintendo’s Wii has an accessory that monitors player heartbeats during games. And cell phones have begun incorporating sensors to transform into portable labs or medical devices.