European Team May Have Solved Galactic ‘Chicken or Egg’ Conundrum

So which comes first, the black hole or the galaxy? The questions has vexed astrophysicists for ages, but European researchers... 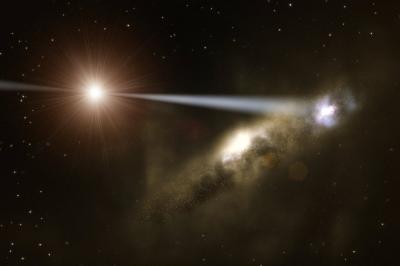 So which comes first, the black hole or the galaxy? The questions has vexed astrophysicists for ages, but European researchers think they may have figured out the answer. A recent study suggests supermassive black holes can spawn star formation, in essence creating their own host galaxies around them.

The team of astronomers observed a specific quasar (HE0450-2958 for all you space wonks) that, by all appearances, has no host galaxy. Researchers thought that perhaps the quasar’s host galaxy was hidden behind a large mass of space dust, but using ESO’s Very Large Telescope, they determined that this is not the case. What they did find is that an unrelated galaxy nearby is producing stars like it’s going out of style — something like 350 suns per year, 100 times more quickly than other galaxies in the universal neighborhood.

As such, researchers think black hole jets could catalyze galaxy formation by providing the energy and matter necessary to create stars. The theory also provides an explanation as to why galaxies with more massive black holes contain more stars.