Roadside bombings are, unfortunately, a part of daily life for troops in Afghanistan and Iraq, and almost every day the... 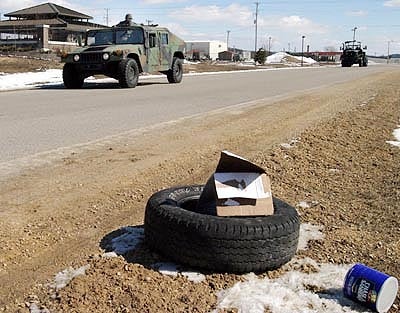 050315-A-3169P A HUMMV drives by a simulated IED after teh student crew discovered and the neutralized the "bomb" as part of a counter IED class taught fro the first time at Fort McCoy this week.
SHARE

Roadside bombings are, unfortunately, a part of daily life for troops in Afghanistan and Iraq, and almost every day the military captures surveillance footage of improvised explosive devices being set and detonated. Rather than letting the footage languish, a joint team of counter-IED experts is quickly flipping the footage into video game-like simulations that make training drills as versatile and flexible as the troops themselves.

The Iraqi and Afghan conflicts have challenged conventional training simulation methods, in which simulations are based upon anticipated battle scenarios rather than actual conditions in the field. But in the two current conflicts, the enemy changes his tactics, munitions and methods often; the Taliban fights one way, Al-Qaeda may fight another, and no two IEDs need be exactly the same to produce casualties.

The joint training counter-IED operations integration center connects with troops remotely via military networks or deploys trainers that bring the latest intel and simulations to the field. Using surveillance videos from actual IED attacks, they can turn around a 3-D simulation in a week – some in just a few days – based on the latest insurgent tactics. If the insurgents change their methods, the programmers simply alter the game to mirror those changes, giving soldiers a more realistic training experience.

For instance, working with these simulations drivers in a convoy can familiarize themselves with routes through an area while learning the telltale signs of the particular IEDs most recently used there. If insurgents have recently switched from burying their devices to stashing them in waste bins, that change can be programmed into the game, preparing soldiers for the specific mission at hand. The counter-IED training team is even integrating pyrotechnics into the games to enhance the simulations. And you thought Modern Warfare 2 was cool.