In 2009, science got a hefty shot in the arm from the federal government’s stimulus spending. Now U.S. citizens can... 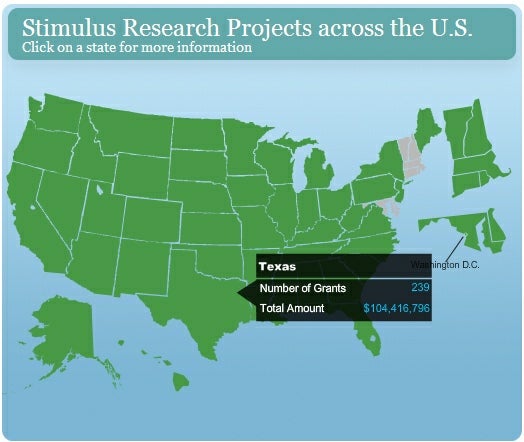 In 2009, science got a hefty shot in the arm from the federal government’s stimulus spending. Now U.S. citizens can see exactly how their taxpayer dollars go toward funding video games that test autism responses, or discovering lakes hidden beneath the Antarctic ice sheet.

The American Recovery and Reinvestment Act of 2009 (ARRA) devoted $21 billion toward scientific research and development, as well as science-related construction and the purchase of scientific equipment. The new website provides a clickable map that breaks down that science funding by state: top recipients include California with more than $1 billion, New York with almost $614 million and Illinois with $555 million.

Among the federal science agencies, the National Institutes of Health received the largest share by far with $10.4 billion. The National Science Foundation took $3 billion, and NASA received $1 billion for its space exploration efforts.

The Department of Energy alone received $36.7 billion, with $1.6 billion going toward the DOE Office of Science. Another $400 million of the DOE funding went to the new ARPA-E agency modeled on the Pentagon’s mad science agency DARPA.

We invite PopSci readers to uncover quirky or interesting projects that are getting taxpayer funding, and share them here.