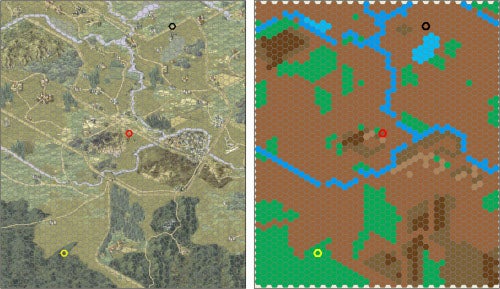 Moving through real-life battlefields inevitably proves trickier than playing a game of Minesweeper, but Spanish researchers and army officers have converted the video game Panzer General into a simulator that can test troop maneuver algorithms based on ant colony behavior.

The software would allow army units to find the best paths through hazardous battlefields, with minimal casualties balanced against best possible speed. It takes a cue from the behavior of ant scouts that discover the best paths leading to food, and then leave pheromone scent trails for other ants to follow. Ants end up choosing the “best” routes that have been painted multiple times by their fellow scouts, as a sort of vote on the best trail.

Similar ant colony algorithms have previously helped researchers establish efficient truck routes and secure computer networks against worms. Drones of the near-future may also operate with a type of swarm intelligence on the battlefield.

Early results from the Panzer General mod have impressed the Spanish Military of Defense enough for it to consider using the simulator in designing real military strategies. The paper came out earlier this year.

Perhaps the only visible downside to the simulator is that it does not play as prettily as games like Company of Heroes or Men of War. But then again, war’s no game.

[University of Granada via The Register]