LaserMotive is First Ever Prize Winner in Space Elevator Games

The team's robot stands to win $900,000 from NASA for climbing a ribbon nearly a kilometer long 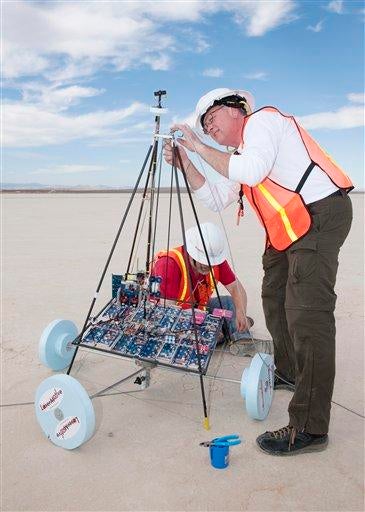 David Bashford of LaserMotive prepares the climber for their award-winning run.

First proposed in 1895, and popularized by the Arthur C. Clarke book The Fountains of Paradise, space elevators have a rich history in the culture of space travel. Unfortunately, the history of their engineering success is far less impressive. But if the results from this week’s Space Elevator Games are any indication, that might be about to change.

Funded by NASA and the Spaceward Foundation, the yearly contest offers a $2 million first prize to any group whose machine can quickly climb a kilometer-long ribbon tethered to a helicopter, while receiving power remotely from the ground. On Tuesday, LaserMotive became the first team in competition history to qualify for the $900,000 second prize.

The LaserMotive machine consists of a motor that pulls the device up the 2,953-foot-long ribbon, photovoltaic cells that power the motor, and a ground-based laser that provides the light for the cells. LaserMotive set a new record for the competition, and became the first team to ever reach the top of the ribbon. However, they had to settle for the $900,000 second prize, as securing the $2 million first prize requires not only reaching the top of the ribbon, but doing so at an average speed of 11 miles per hour. Sadly, the LaserMotive machine ran slightly slower than that mark.

Encouragingly, the laser that powered the ascent utilized half the energy of LaserMotive’s previous laser, and to far better results. At this rate, next year’s team might actually have a chance to bring home the gold. The competition continues today, and if another team matches LaserMotive’s achievement, they might have to split the prize money. In the meanwhile, you can check out LaserMotive’s award-winning trial in the rather slow-moving video below.

[via The Associated Press]