Even as some of the world moves into a future of unimaginably complex technology, many communities still lack the basic... 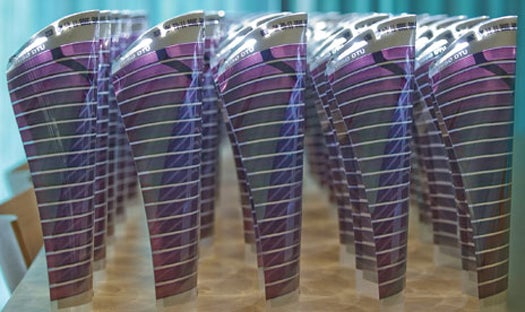 Even as some of the world moves into a future of unimaginably complex technology, many communities still lack the basic electrical infrastructure needed to power even simply electric devices like light bulbs. Unwilling to wait for the wiring to catch up to the demand, Danish researcher Frederik Krebs has created an LED lamp embedded within a flexible, printable solar panel that could replace the kerosene lamps still used around the developing world.

While sheets of photovoltaics aren’t that new, Krebs is the first person to embed LEDs inside those solar panels, according to IEEE Spectrum. Printed out in reams, the combo light/solar panel can be rolled up to mimic a lamp, and could potentially provide light to the 1.5 billion people around the wold currently living without electricity.

Right now, the panels used in Krebs’s lamp are, even by his own admission, some of the lest efficient cells on the market. However, that lack of efficiency also translates into low cost, an important factor in spreading these lamps throughout the world’s poorest regions. Besides, even at 1 percent efficiency, the panels still generate enough energy to produce light.

Krebs aims to get the lamps on the market by next year, by which time he will have dropped the cost of the lamp from $27 to $7 dollars. The lamps only last for a year, but at that low price, they could reduce the annual lighting costs in isolated villages by as much as 75 percent.