The death of television and the advent of online-only programming has been upon us every week going back at least... 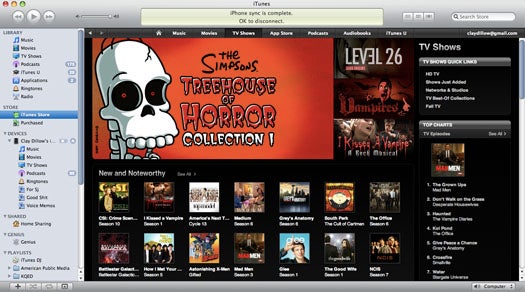 Rumor has it Apple is courting networks for a $30 subscription Web-TV service it hopes to have working by early next year, meaning Apple's a la carte television offerings might soon become a subscription-based replacement for cable.
SHARE

The death of television and the advent of online-only programming has been upon us every week going back at least as far as the first Hulu stream, and perhaps much further depending on which rumor-monger blogs you subscribe to. But a rumor hit the Web today that, if true, has the potential to tip the scales toward a Web-delivered TV future faster than many might imagine: According to the AllThingsD, Apple is pitching a $30 subscription package to networks that would deliver TV over the Web to customers via iTunes, and it wants to get it up and running by early next year.

In Apple’s vision, networks would climb aboard the iTunes delivery system, offering their programming via Apple’s multimedia service, which Apple would deliver to iTunes users for $30 per month. Certainly some kind of revenue sharing deal would be involved, and networks could still monetize via advertising within their shows. Further appealing to customers and networks alike, Apple isn’t tying the service to a piece of hardware like its unimpressive Apple TV box, which would require customers to make an additional investment. Rather, by streaming the service through iTunes, Apple offers the networks a built-in base of 100 million accounts that already use the software, while turning any computer or handheld device sporting iTunes into a potential means of consumption.

The real question for Apple is this: will any of the networks actually get on board? Peter Kafka over at AllThingsD thinks if anyone jumps first, it will be Disney, since CEO Bob Iger has been open to jumping in bed with Apple in the past. That first big client will likely be the hardest one, so if Disney pulls the trigger, other media giants might be forced to follow suit.

But there are other complications. Cable companies have everything to lose by allowing such an arrangement, and will likely fight tooth and nail to remain the dominant medium for programming delivery. Cable networks have profitable relationships with those cable providers that they will be loath to jeopardize, and networks themselves will be troubled by the idea that offering programming via iTunes on a subscription basis–even if the shows don’t hit the service until after they’ve aired on traditional television–will cannibalize their own ratings, driving down ad rates.

But unlike failed attempts to bring television to consumers via the Web, Apple is no startup, and its ability to deliver customers may win out. The movement is already underway, with other large companies paving the way for Apple: Netflix bundles a streaming movie service with its mail subscription DVD service, Blockbuster, Amazon and iTunes already rent movies over the Web and Google is stepping into the fray by offering films through YouTube. Then there’s television’s own success story in Hulu, a joint-venture between three leading networks (NBC, ABC and Fox) to stream their content, with limited but mandatory advertising, over the Web.

Then there’s the delivery side of things; Apple has a lock on what are arguably two of the best mobile media delivery devices in the iPhone and iPod Touch, and should the much-ballyhooed Tablet come roaring onto the scene next year as rumored, Apple might have the best portable device for watching video media tied directly to iTunes. If the networks are willing to give Apple a chance, it might just be able to meet the converging demands of increased portability and on-demand choice right in the middle. Apple completely shook up the music business when it introduced iTunes; the potential is there for it to do the same to television.