Of the remaining mysteries surrounding the Watergate break-in, none confound conspiracy buffs more than the 18 and a half minutes... 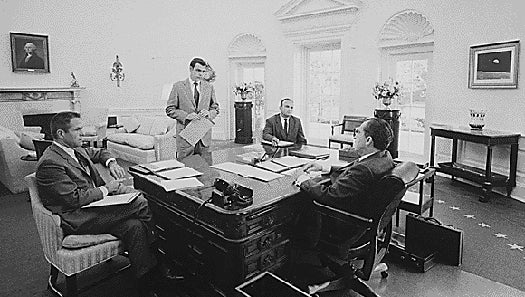 Of the remaining mysteries surrounding the Watergate break-in, none confound conspiracy buffs more than the 18 and a half minutes of tape deleted from the June 20th, 1972 meeting in the Oval Office. Now, after 37 years and several forensic analyses of the audio tape itself, the National Archives will turn its attention to the only physical notes taken during that meeting in the hope of extracting more information about the famous recording gap.

The notes, taken by Nixon White House Chief of Staff H.R. Haldeman, will be analyzed for impressions to see if any other currently undiscovered writing occurred above them on Haldeman’s pad. These tests will include chemical analysis of the ink and the paper to see if any carbon copies were made, and light tests to search for indentations too small for the naked eye to pick up.

The tests will be conducted by a joint team composed of experts from the Library of Congress, the Treasury Department, and the Department of Alcohol, Tobacco, and Firearms.

Haldeman eventually served 18 months in Federal prison for his role in covering up the Watergate break-in. It was later revealed that Haldeman’s fraternity brother Mark Felt served as the famous source named “Deep Throat,” who provided information about the cover up to Washington Post reports Woodward and Bernstein.

The analysts looking at the notes say the results should come out sometime next year. No doubt, Oliver Stone will be first in line for the news.