Will gigantic genetically modified legs become the next performance enhancer for athletes? 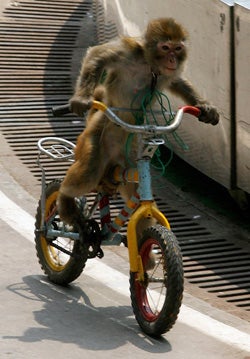 It’s getting much harder to cheat at sports these days. Urine tests have been re-calibrated to look for the cream and the clear, blood tests check for the presence of excessive oxygen, and you spitballers? Yeah, they’re on to you, too. But a new breakthrough in gene therapy may allow athletes to skip the steroids in favor of adding muscles from the DNA up.

Something’s Different About The Tour de France This Year

Writing in Science Transitional Medicine, a team of scientists from Nation Wide Children’s Hospital in Columbus, Ohio, report that a new gene therapy has created both more muscle, and stronger muscle, in the legs of test monkeys. The altered gene controls expression of a protein that blocks the action of a chemical that naturally degrades muscle mass. The new genes were injected directly into the monkey’s legs, and took effect locally.

Needless to say, with professional athletes showing a willingness to inject red blood cells, take copious amounts of speed, and ingest whatever their cousin just brought back from the Dominican Republic, worries have already cropped up that this breakthrough will find its way into the world of sports.

The World Anti-Doping Authority has already outlawed gene doping, but then again, steroids were also banned when superstars like Floyd Landis and A-Rod took them.