Dutch Hacker Holds Jail-Broken iPhones Hostage, Demands Ransom Or The Gadget Gets It

The media generally portrays hacker as criminals going after law-abiding computer users, but one Dutch hacker has turned his sights... 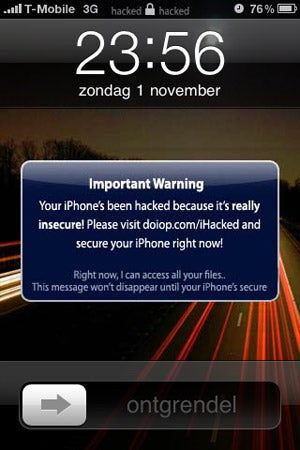 The media generally portrays hacker as criminals going after law-abiding computer users, but one Dutch hacker has turned his sights on more fertile prey: other less-skilled, or even aspirational hackers. Like a digital stickup boy, he has remotely kidnapped illegally (according to Apple) jailbroken iPhones in the Netherlands, holding them hostage for five Euros.

Jailbreaking an iPhone allows users to install software from sources beyond Apple’s App Store. And although the vitality of the jailbreak software ecosystem has dipped significantly now that it is not the only way to install native code on your iPhone, some estimates still place the number of jail-broken devices as high as 10 percent of all iPhones and iPod Touches.

When a user jailbreaks their phone, a password controlling remote access to the phone resets to the generic factory password coded at the factory. Many users forget to redo their password, allowing the Dutch hacker to lock up the phone until the user paid out the five-euro ransom via PayPal.

Whether or not jail breaking the iPhone constitutes a crime has yet to be resolved, but Apple considers it a copyright violation that voids the warranty of the device.

The total number of victims, and the amount of money extorted by the hacker remains unknown.