The radical radiotelescope is online 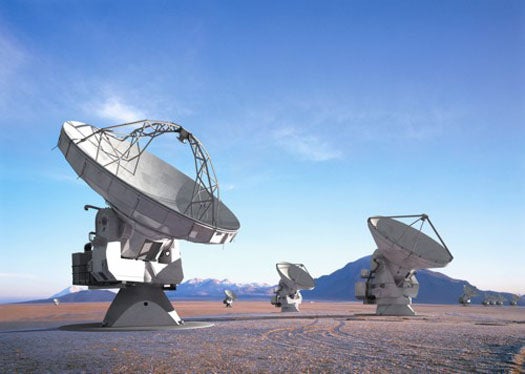 News from high in the Chilean Andes this morning: the ALMA observatory in Chile, the largest, most ambitious ground-based astronomy tool ever created, made its first measurements today from its overlook 17,400 above sea level. The interferometric measurements of radio signals, or “fringes,” from a distant quasar at sub-millimeter wavelengths prove that ALMA isn’t just hype, boasting unprecedented sensitivity and resolution.

And that’s using just two of the eventual 66 antennas making up the array.

The Atacama Large Millimeter/submillimeter Array is currently under construction on the Chajnantor plateau in northern Chile’s Atacama desert, with completion slated for 2012. When all 66 antennas are working in synch, researchers believe ALMA will revolutionize the way we see the universe, probing deep into some of the first galaxies to form after the Big Bang and observing planets in mid-formation around young stars.

That’s not to mention that she’s one beautiful radio telescope. For a more extensive look at ALMA’s trip up to the Atacama, check out our image gallery, or check out the galleries at the NRAO.