If knowing is half the battle, then firefighters waging war on a blaze start at a serious disadvantage. A lack... 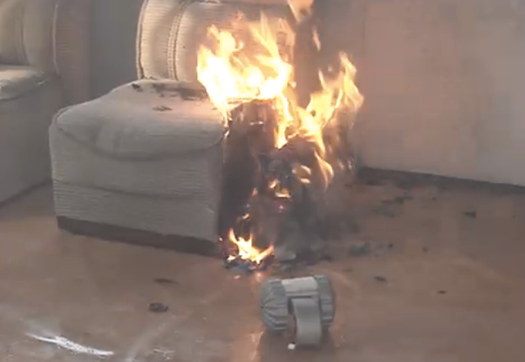 If knowing is half the battle, then firefighters waging war on a blaze start at a serious disadvantage. A lack of information concerning what’s going on inside a fire means firefighting personnel often must speculate which way the fire is moving, where the hottest spots are, and most importantly, where people might be trapped by the flames. The Fire Spy Robot hopes to tip the scales back in firefighters’ favor by providing valuable intel from inside infernos even while helping to extinguish them.

Developed by South Korean firm Hoya, the remote-controlled Fire Spy can go places firefighters can’t safely reach, beaming back images and sounds while relaying temperature, smoke and air quality data to firefighters over 50 yards away. It’s not a simple snapshot either: Fire Spy can roam a burning structure for up to half an hour, pushing through temperatures of up to 320 degrees Fahrenheit at a speed of one foot per second. Measuring just 12.5 cm in diameter and weighing just under four-and-a-half pounds, Fire Spy can search for survivors in tight spaces while surviving falls of up to six feet.

Using its onboard light and camera, Fire Spy’s main function is to precisely locate people trapped in burning structures so live firefighters spend less time searching for them. The data also provides firefighters critical information about safe routes in and out of a building so they can develop the best possible rescue plan. But like all good reconnaissance drones, Fire Spy can also join the fight, towing a hose and spraying water as it explores a blaze.

Of course, some fires are too big for the tiny Spy, so another South Korean firm, DRB Fatec, has developed its own larger firefighting robot. At nearly 3 feet tall, it can withstand temperatures up to 920 degrees Fahrenheit for an hour or more. Between the two of them, firefighters may soon have a one-two punch that delivers them the upper-hand when the heat is on.